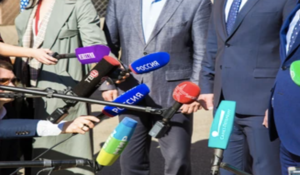 Dr. Vartanova emphasized that while Russia is enigmatic and seems erratic in its information operations (IO), its actions can still be predicted. Russia’s practice of flying fighter jets over a US battleship in the Baltic Sea on two separate occasions in 2016 is one such pattern of nonverbal Russian propaganda. Russia’s actions and messages are also filled with symbolism directed at both its domestic audience and foreign audiences, representing Russia as a growing world power. An example of this symbolism is Russia’s decision to name its COVID-19 vaccine Sputnik-V to pay homage to Russia’s launch of the first manned vehicle into space in 1957. The use of this symbolism is ultimately to protect Putin’s regime and maintain the security of Russia’s vast geographical borders using IO, Dr. Vartanova argued. In general, Russia believes that the best way to bolster its defense through IO is a mixture of military action; diplomacy; and influence among civilian communities that portray Russia as a world power, an empire builder, and a protector against Western ideals. Moreover, Russia expands its influence in local communities through influence operations online, national media, and growing ex-patriot communities around the world.

Dr. Vartanova also argued that Russia aims to use its influence to upset the current multi-polar world order in which the US is currently leading. Unlike the US, Russia views information confrontation, or informatsionnoye protivoborstvo (IPb), as a continuous state. Russia also views all potential avenues of communication as tools with which to influence or attack the US and NATO, its two main geopolitical rivals. Ultimately, the Kremlin’s goal is to paint the US as a destabilizing world power, weaken the US dollar and the Euro, increase Russia’s geopolitical influence, and strengthen its maritime trade routes through a growing partnership with China. The Kremlin also understands that while narrative building is important, to profoundly influence a target audience, Russia needs to use physical actions that affect target populations more than written or spoken words. Dr. Vartanova concluded her presentation by stating that all of Russia’s messages feed into one Russian “mega narrative,” which depicts Russia as a growing world power deserving of respect from other countries.