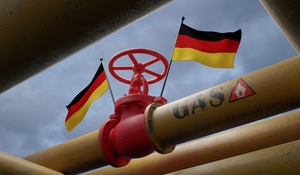 After the Cold War, despite many warning symbols from Russia (e.g., President Vladimir Putin’s election in 1999, the war against Georgia in 2008, the annexation of Crimea in 2014), Germany and the rest of Europe entered a state of complacency regarding a potential Russian threat to Western security, energy, and hard power. Dr. Dorondo explained that successive German chancellors adopted a rosy vision of the nation’s future—a carbon-neutral Germany within a peaceful Europe. In the process, the nuclear power generation sector of Germany’s economy would be phased out, coal would no longer be used, and natural gas production would contribute to a new socioeconomic vision of the future. In part due to the lack of a perceived threat from Russia, German limited its military spending.

This rosy vision of the future quickly faded when Russia invaded Ukraine on February 24, 2022. Berlin began to recognize the threat that Russia posed to German and Western European security. The possibility of a nuclear escalation from Russia loomed once again, and Germany maintained several key strategic vulnerabilities, including a small defense budget, heavy reliance on Russian energy sources, and trade dependence on China, a close Russian partner. In response to the Russian invasion of Ukraine, German Chancellor Olaf Scholz’s Ampelkoalition (or “Traffic Light Coalition,” composed of the Social Democratic Party, the Free Democratic Party, and the Green Party) announced a new set of policies: Zeitenwende. Zeitenwende drastically increased Germany’s defense budget from pre-February 2022 levels. Signaling significant movement away from German green energy ambitions, this plan called for a reduction of Russian hydrocarbon imports, energy diversification, an increase in the use of nuclear power and coal, and nuclear sharing within NATO. Lastly, Zeitenwende outlined future investments in domestic energy assistance and continuing military, financial, humanitarian, and post-war assistance to Ukraine.

Zeitenwende also unveiled a series of political questions regarding the stances of the German political parties within the Ampelkoalition. The announcement has marked shifting positions in the Social Democratic Party regarding its views on how to interact with Russia, nuclear sharing, and the ideal level of military spending. It has also brought into question whether the Free Democratic Party’s policy preference is still widespread fiscal restraint. Finally, the Green Party appears to be supporting Germany’s increased military spending and support to Ukraine—a departure from previous party stances. Overall, Dr. Dorondo theorized that the Ampelkoalition recognized that “integrated security” is vital in the current strategic environment in order to preserve Germany’s energy security and military security, so they are willing to make concessions in support of a greater cause.

Dr. David R. Dorondo earned the degree of B.A. with honors in history from Armstrong State College in 1980 and the M.A. in German and European diplomatic history from the University of South Carolina in 1984. From 1984 to 1987, he was a member of St. Antony’s College, Oxford and was admitted to the degree of DPhil. from the University of Oxford in 1988. While earning his doctorate, he also served as a Fulbright Graduate Research Fellow at the Otto-Friedrich-Universität Bamberg in the Federal Republic of Germany in 1985-1986, where he had earlier spent the year 1981-1982 as a graduate exchange student. Since 1987, Dorondo has been a member of the Department of History of Western Carolina University. There he teaches both graduate and undergraduate courses in modern European military and political history and the history of international relations. He is a member of US Strategic Command’s Academic Alliance and has served as a subject-matter expert for, and contributor to, the US Joint Staff DDGO J-39 Strategic Multilayer Assessment (SMA). Since 2020 he has served as a member of the NATO Science and Technology Office’s Research Task Group SAS-163 Energy Security in the Era of Hybrid Warfare. To date, he has written or translated four books on modern German military and political history and has contributed to numerous journals, military encyclopedias, and periodicals.