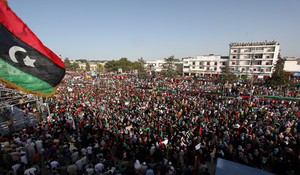 First, LTG(R) Nagata provided a series of historical remarks, beginning with the passage of United Nations Security Council Resolution 1973 in 2011, which created a no-fly zone as a result of the violent Libyan civil war occurring at the time. There was no language in this resolution regarding a plan to overthrow former Libyan Prime Minister Muammar Qaddafi; however, this event occurred regardless. After the overthrow, a transition council was created to promote lawful elections; however, armed militias began asserting their authority in multiple areas, and the interim Libyan prime minister did not have the power to crack down on them. This led to the dissolution of the General National Congress in Libya and an ongoing competition between Libyan military commander Khalifa Haftar and anti-Libyan National Army (LNA) protestors. To conclude his remarks, LTG(R) Nagata stated that the Libyan strategic environment is a “perverse cauldron for the US,” as a proxy war is occurring that involves US allies fighting US allies.

Next, Mr. Pack stated that Libya, from a strategic perspective, is one of the most important zones of conflict from a NATO perspective at the present moment. The US and its European allies are interested in Libya due to its crude oil reserves, its proliferation of small arms, and the fact that it is the only civil war in human history where the same governing body has been the primary funder of both sides of the war. Mr. Pack stated that this war has moved beyond a proxy war, as many foreign nations have penetrated into Libyan affairs. Mr. Pack also discussed the fissures within the broad anti-LNA and pro-LNA coalitions. He stated that the anti-LNA coalition is fragile, has little domestic power, and relies on ground powers to exert influence. The pro-LNA coalition, on the other hand, is made up of different actors who support the LNA’s ongoing narrative—to combat terrorism and corruption in Tripoli. Haftar is the kingpin of this coalition, and if he was killed or removed from his position, the coalition would fall apart, according to Mr. Pack. He concluded that the future of Libya would depend on whether Haftar reached an abrupt or gradual demise.

Mr. Winer then discussed Haftar’s psychology and intentions. He stated that Haftar’s goal has always been to become the top military general in Libya and ultimately a dictator. Haftar obtained this position of power as a result of ineffective governance in Tripoli and the United Arab Emirates’ attempts to prevent the Muslim Brotherhood from gaining power. Mr. Winer argued that Haftar does not have the potential to become a constitutional leader rather than a dictator, as he has always been clear and consistent about his intentions. Moreover, Haftar intends to create a family-based system in Libya, rather than a party-based system or a theocratic-based system, to ensure that his lineage remains in power even after his demise. Mr. Winer then stated that the domestic problem in Libya is Haftar, while the external problems are Russia’s financial support of the pro-LNA coalition and the UAE’s involvement in the war. Mr. Winer, in closing, advised US decision makers to address these international issues first, then Libya’s domestic issues.