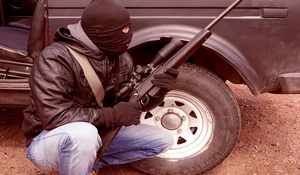 [B2] Mr. Popp first provided an overview of an analysis his team did to assess what kind of lessons can be learned from deradicalization programs of the past. The NSI team conducted a targeted literature review of both historical disengagement and deradicalization programs and assessments and evaluations of such programs, as well as a case study analysis and a SME elicitation. Mr. Popp highlighted several of the team’s findings. First, the team observed that there is an important distinction to be made between disengagement (changing behavior) and deradicalization (changing attitudes). Second, the team found that measuring “successful” deradicalization is challenging. Finally, the team identified four characteristics that appear to be fairly common among “successful” disengagement and deradicalization programs: 1) working to create a sense of hope and purpose, 2) building a sense of community, 3) providing individual attention and regimented daily schedules, and 4) ensuring sustainable, long-term commitments. Mr. Popp concluded by noting, however, that there is no “one size fits all” approach to disengagement and deradicalization; thus, programs should be tailored to specific environments and individuals. Dr. Suedfeld then presented the University of British Columbia (UBC) team’s findings derived from its literature review of psychological theory and research on both deradicalization and integrative complexity. The UBC team used Kelman’s three processes of social influence (compliance, identification, internalization) as the basis of its analysis, focusing on four case studies: 1) Northern Ireland, which represented the use of incapacitation as a method for re-education, 2) Saudi Arabia, which represented the reintegration of disengaged individuals into society, 3) Tunisia, which represented political change through identification, and 4) Cambridge, which represented internalization via cognitive change. Dr. Suedfeld highlighted four lessons learned from his team’s research: 1) it is important to define disengagement and deradicalization, 2) an unbiased definition and empirical measurement of success is critical, 3) there is a need to incorporate relevant cultural and social factors in analysis and planning, and 4) CENTCOM must pay attention to the cognitive processes of radicalized individuals and of participants of deradicalization programs. He also stated that there is a large body of evidence that supports the association between changes in integrative complexity and the peaceful or violent resolution of political conflict. Moreover, the UBC team found that militants and terrorist groups displayed, on average, lower integrative complexity if they accepted, supported, and engaged in violence. Next, Dr. Dorondo discussed denazification in Germany and applied his insights to the potential deradicalization of individuals in the CENTCOM AOR. Dr. Dorondo stated that denazification was a generational process and took 25-30 years to fully take place. Moreover, inter-allied differences prevented a common process towards denazification, and East-West German ideological conflict affected the success of denazification efforts. Despite these hurdles, Western democracies’ “soft power” influence and European integration contributed to success achieved over the long term, as did domestic German buy in and the presence of Non-Nazi leadership, governance, and structures. To conclude, Dr. Dorondo noted that neo-Nazi ideology still exists in Germany despite decades of denazification efforts. He questioned whether this same trend might become evident in the CENTCOM area of responsibility (AOR) with respect to radical Islamist thought. Dr. Dorondo also questioned the role that social media may play in the perpetuation of radical ideas in the CENTCOM AOR, as it has with neo-Nazism.

[B3] Dr. Dorondo then addressed where the ownership of the radicalization problem in the CENTCOM AOR resides, what the roles of militaries should be, and what might be the most effective voice to promote deradicalization. Dr. Dorondo focused on the post-Brexit EU2+1 and German-speaking East Central Europe’s (ECE) participation in a US “coalition of the willing.” He stated that historically conditioned attitudes in the EU2+1 and GS-ECE complicate effective and rapid responses to popular radicalization and mass migration (PRMM). These states will continue to stress the importance of an international rules-based, UN-led effort to mitigate PRMM insofar as it threatens Europe directly. Thus, EU2 + 1 and GS-ECE participation in a US-led coalition to mitigate PRMM is unlikely. Dr. Dorondo suggested that CENTCOM (and the US writ large) will have to “shoulder the lion’s share” of the international effort towards PRMM. Failure to do so could result in further strategic openings for Russia and China in the region. Mr. Rieger proceeded to discuss who has responsibility for the deradicalization problem in the CENTCOM AOR. He highlighted the United Nations High Commissioner for Refugees (UNHCR), which has been a major player in deradicalization and reintegration efforts within the CENTCOM AOR. However, its ability to assist in providing infrastructure, services, settlement, integration, and repatriation remain limited to an extent. CENTCOM can also play a role in the region, Mr. Rieger stated, as it can help protect/remove individuals from conflict zones, assist with relocation, and assist with the development of camp infrastructure and security, with authorization and funding. He also suggested that the host country should play a role in limiting radicalization by providing shelter and basic services for displaced civilians, prohibiting VEO incursion, preventing political and militant recruitment within camps, and setting fair, equitable administrative and legal policies regarding freedom of movement and the ability to work. To conclude, Mr. Rieger stated that the most effective voices in combatting radicalization must be seen as credible, knowledgeable, and relatable and should be from the same ethnic and religious background as the individuals to whom they are speaking.