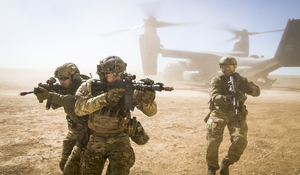 The current National Security, Defense, and Military Strategies identify great power rivalries from Russia and China as two of the main challenges facing the United States for the foreseeable future. The transition from non-state threats to existential ones posted by great powers means more than reallocation of resources, as important as those are for the coming fights. It must also include paradigm shifts in the ways the United States organizes it forces, authorizes their uses, and justifies the application of all elements of national power in the pursuit of national security.

The purpose of this Invited Perspective Paper is to explore the implications of the Special Operations Forces (SOF) Paradigm in the emerging Great Power Competition (GPC) space. It resulted largely from the “SOF Paradigm in Great Power Competition” Speaker Series as part of the Joint Staff Global Competition and Conflict Strategic Multilayer Assessment. Like the Speaker Series, this concept paper evaluates more than existing Special Operations capabilities focused on counter Violent Extremist Organization efforts. More broadly, it considers the ways current approaches can be applied to great power rivalries within the full-spectrum of hybrid warfare. It also expands the potential applications of SOF instruments to historic and emerging areas of the competition space. The project is by no means intended to be exhaustive or the final word on the specific topics, instead presenting promising ideas that represent some of the adaptations currently underway in the Special Operations community.