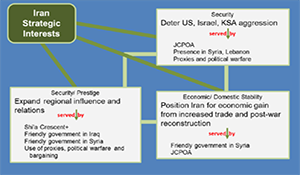 Prior to the signing of the Iran Joint Comprehensive Plan of Action (JCPOA) in July 2014, Iran watchers tended to anticipate one of two outcomes. One camp expected a reduction in US-Iran tensions and that the JCPOA might present an opening for improved regional cooperation between the US-led coalition and Iran. The other camp predicted that Iran would become more assertive in wielding its influence in the region once the agreement was reached.

Implications of JCPOA for the Near-term Battle: Marginal

Iran experts in the SMA network generally believe that JCPOA has had negligible, if any, impact on Iran’s strategy and tactics in Syria and Iraq.1 While Iran does appear to have adopted a more assertive regional policy since the agreement, the experts attribute this change to regional dynamics that are advantageous to Iran, and Iran having been on “good behavior during the negotiations” rather than to Iran having been emboldened by the JCPOA. Patricia Degennaro (TRADOC G27) goes a step further. In her view, the impact of the JCPOA on the battle against ISIL is not only insignificant, but concern about it is misdirected: “the JCPOA itself will not impede the Coalition’s ability to prosecute the war … and create the conditions for political, humanitarian and security sector stability. Isolation of Iran will impede the coalition’s mission.”

 Richard Davis of Artis International takes a different perspective on the strategic and operational implications of the JCPOA. He argues that Saudi, Israeli and Turkish leaders view the JCPOA together with US support for the Government of Iraq as evidence of a US-Iran rapprochement that will curb US enthusiasm for accommodating Saudi Arabia’s and Turkey’s own regional interests. Davis expects that this perception will “certainly manifest itself in the support for proxies in Syria, Iraq and Yemen. Specifically, it means that Saudi Arabia and Turkey will likely be more belligerent toward US policies and tactical interests in the fight to defeat ISIL.”

The SMA experts identified two ways in which the JCPOA could impact coalition efforts to stabilize the region in the mid- to longer-term: 1) if Iran were to use it as a means of generating friction in order to influence Coalition actions for example by convincing Coalition leaders that operations counter to Iranian interests (e.g., in Syria) could jeopardize the JCPOA; and, 2) indirectly, as having created the sanction relief that increases Iranian revenue and that can be used to fund proxy forces and other Iranian influence operations.

Provoking Friction as a Bargaining Chip. A classic rule of bargaining is that the party that is more indifferent to particular outcomes has a negotiating advantage. At least for the coming months, this may be Iran. According to the experts, Iran is likely to continue to use the JCPOA as a source of friction – real, or contrived – to gain leverage over the US and regional allies. The perception that the Obama Administration is set on retaining the agreement presents Tehran with a potent influence lever: provoking tensions around implementation or violations of JCPOA that look to put the deal in jeopardy, but that it can use to pressure the US and allies into negotiating further sanctions relief, or post-ISIL conditions in Syria and Iraq that are favorable to Iran. However, because defeat of ISIL and other groups that Iran sees as Saudi-funded Sunni extremists,2 the experts feel that if Iran were to engage in physical or more serious response to perceived JPCOA violations, they would choose to strike out in areas in which they are already challenging the US and Coalition partners (e.g., at sea in the Persian Gulf and Red Sea; stepping up funding or arms deliveries to Shiite fighters militants in Saudi Arabia, Lebanon, Yemen) rather than in ways that would actually impede ISIL’s defeat.

Increased Proxy Funding. Iran has often demonstrated a strategic interest in maintaining its influence with Shi’a communities and political parties across the region, including of course, providing support to Shi’a militia groups (Bazoobandi, 2014).3 Pre-JCPOA sanctions inhibited Iran’s ability to provide “continuous robust financial, economic or militarily support to its allies” according to Patricia Degennaro (TRADOC G27). An obvious, albeit indirect implication of the JCPOA sanctions relief for security and political stability in Iraq in the longer term is the additional revenue available to Iran to fund proxies and conduct “political warfare” as it regains its position in international finance and trade.4 It will take time for Iran to begin to benefit in a sustainable way from the JCPOA sanctions relief. As a result it is not as likely to be a factor in Coalition prosecution of the wars in Iraq and Syria, but later, in the resources Iran can afford to give to both political and militia proxies to shape the post-ISIL’s region to its liking.