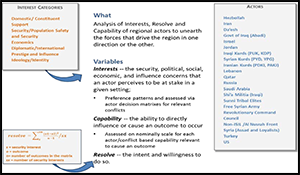 The following are high-level results of a study assessing Middle East regional dynamics based on the alignments and conflicts among three critical drivers: actor interests, resources and resolve. Expected outcomes are based on the strategic interests of regional actors.

ISIL will be defeated in Syria and Iraq

Based on the balance of actor interests, resolve and capability, the defeat of Islamic State organization seems highly likely (defeat of the ideology is another matter). Specifically, the push for ISIL defeat in Syria is led by Iran and the Assad regime, both of which have high potential capacity and high resolve relative to ISIL defeat. Only ISIL has high resolve toward ISIL expansion in Syria. Iran, Jordan,Iraqi Kurds, Saudi Arabia, and Shi’a Hardline & Militia, show highest resolve for ISIL defeat in Iraq.

Conflict will continue in Syria following ISIL defeat; will escalate significantly with threat of Assad defeat

Whether Syrian civil conflict will cease in the context of an ISIL defeat is too close to call. Assad, Russia and Iran have strong untapped capability to drive an Assad victory against the remaining Opposition although none show high resolve (i.e., the security value gained by an Assad victory versus continued fighting in Syria is not widely different. This reflects the Assad regime’s competing security interests (i.e., one interest is better satisfied by continued conflict, another by Assad victory). Even when we assume the defeat of ISIL in Syria as a precondition, unless actor interests change dramatically, the number of interests served by continued conflict and the generally low resolve on both sides suggests that we should be skeptical of current agreements regarding the Syrian Civil War. Moreover, resolve scores rise sharply when continued conflict is replaced by the possibility of Assad defeat. Together these results suggest that unless Assad’s, Iran’s and Russia’s perceived security concerns are altered significantly, these actors have both the capacity and will to engage strongly to avoid an impending defeat. The high resolve of the three actors to avoid defeat should be taken as a warning of their high tolerance for escalation in the civil conflict.

Implication: Tolerating Russian-Iranian military activities in Syria and redirecting US resources to humanitarian assistance of refugees in and around Syria has greater value across the range of US interests and aligns more fully with the balance of US security interests in the region.

While the majority of regional actors favor the Government of Iraq (GoI) making concessions to Sunni and Kurdish groups following defeat of ISIL, only the Government of Iraq, Shi’a Hardline and Militia, Sunni Tribes and Iraqi Kurds have significant capability to cause this to happen or not. Unfortunately, the GoI and Shi’a have high resolve to avoid reforms substantive enough to alter Sunni factions’ indifference between GoI and separate Sunni and/or Islamist governance. More unfortunately, when they believe the GoI will not make concessions, Sunni Tribes are indifferent between ISIL governance and the current Government controlling Iraq. That is, they have no current interest served by taking security risks associated with opposing ISIL. However, the outbreak of civil warfare in Iraq does incentivize GoI to make concessions. Iranian backing of substantial GoI reforms changes the GoI preference from minimum to substantive reforms without the necessity of civil warfare.

Implication: Now is the opportune time to engage all parties in publically visible dialogue regarding their views and requirements for post-ISIL governance and security. Engaging Sunni factions on security guarantees and requirements for political inclusion/power is most likely to be effective; Engaging Kurds on economic requirements and enhancing KRG international and domestic political influence encourage cooperation with GoI. Finally, incentivize Iran to help limit stridency of Shi’a hardline in Iraq eases the way for the Abadi government to make substantive overtures and open governance reform talks.

Use of proxy forces by Saudi Arabia and Iran is one of the quickest ways to reignite hostilities in the region, and even though direct confrontation between state forces is the worst outcome for both, the chances of miscalculation leading to unwanted escalation are very high. Both Saudi Arabia and Iran have high resolve to continue supporting regional proxies up to the point that proxy funding or interference prompts direct confrontation between state forces. This is driven by mutual threat perception and interest in regional influence. This leaves open the specter that any conflict resolution in the region could be reignited rapidly if the incentives and interests of the actors involved are not changed.

Implication: International efforts to recognize Iran as a partner, mitigate perceived threat from Saudi Arabia and Israel, and expand trade relations with Europe are potential levers for incentivizing Iran to limit support of proxies. Saudi Arabia may respond to warning of restrictions on US support if proxyism is not curtailed.