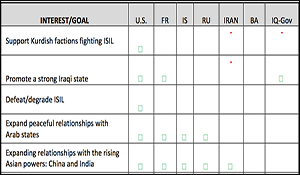 Question (S2): In light of their divergent goals and interests, what are the necessary factors that would permit the U.S.-led Coalition, regional stakeholders (including Israel, Russia, and Iran), or jihadist groups to achieve their aims in Iraq? Where do disparate groups’ interests align and where do they diverge? What can the U.S. coalition do to deny adversaries the ability to achieve their goals?

Considering their divergent goals and interests, experts assessed the necessary factors that would permit the U.S.-led Coalition, Israel, Russia, France, Bahrain, Iraq, Turkey, the Kurds, the Assad regime, Iran, and jihadist groups to achieve their aims. They assessed where several disparate groups’ interests align and where they diverge. When looking at the broad range of actors, a few patterns emerged. The first is in terms of where national security goals and interests were in alignment. Unsurprisingly, perennial allies such as the U.S., Israel and France had several specific points of convergence, as did Russia and Syria. The second is in areas of divergence. As expected, nefarious actors such as the jihadist groups were completely divergent from the interests of the other actors. When assessed at the macro- level three major generalities surfaced.

Promoting Strong and Stable States. The first overarching theme was the goal of promoting strong and stable nation states. While not all the actors agreed on which nation states should be promoted, nearly each actor in the assessment had at least one state that was a priority. Both Bahrain (Gengler) and Russia seek their own regime’s survival (Thomas). Both the U.S. and France see the value of strong Iraqi state (Maye, Tenebaum). France also seeks to limit instability across the Middle East, avoid destabilization in Lebanon, and promote non-hostile state in Syria (Tenebaum).

Relationship Building and Cooperation. A second major generality that emerged was in relationship- building and cooperation. Each of the actors that the experts assessed is prioritizing their relationships or ability to cooperate with strategic partners. For instance, the Israelis are seeking to expand relations with European powers and Arab states, maintain their strategic alliance with the U.S., and develop relationships with rising Asian powers like India and China (Brom). For military reasons, Bahrain needs to maintain its ties to the British and the Americans (Gengler). France seeks to strengthen strategic partnerships with Gulf monarchies (Tenebaum). Strategic cooperation with China and the BRICS is a key tenet of Russian foreign policy (Thomas), yet the Russians are also open to areas of cooperation with the U.S. and NATO on Syria (Thomas). Even the Islamist groups, who are non-state actors, must maintain relationships with wealthy Gulf states like Qatar and Saudi Arabia (Hassan).

Pressure Other States. The third major pattern emerged is where national security goals and interests diverged. Each of the actors in this study seeks to limit the expansion, interference, or hegemonic aspirations of another state. From the Russian perspective, NATO seeks to contain Russia (Thomas). Israel and Bahrain seek to break/slow Iran from regional hegemony or acquiring nuclear weapons (Brom, Gengler). Russia seeks to put pressure on European Union (Thomas). Assad wants to stop the Gulf States from pursuing regime change in Syria (Hassan). Turkey, Syria, Iraq, and Iran would prefer to see less U.S. support for the Kurds (Carreau).

Due to the complex nature of each actor’s goals and interests, it will be very difficult for the U.S. and Coalition partners to create win-sets that will appease each group, yet nearly each actor (aside from the non-state actors and jihadist groups) would agree to the following generalized courses of action:

The central points of negotiation for the U.S. and Coalition partners is likely fall into the following three areas: