Learning From the Countries Favorable to ISIL 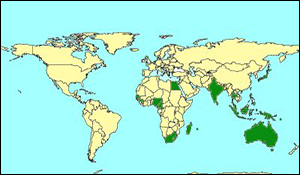 Question (R2 #2): In countries where polling shows favorable opinions of ISIL (Syria, Nigeria, Tunisia, Senegal and Malaysia), what does this tell us? What do these countries have in common? What is our best approach to influence/inform?

The contributors to this Quick Look responded to GEN Votel’s follow-up question, “In countries where polling shows favorable opinions of ISIL (Syria, Nigeria, Tunisia, Senegal, and Malaysia), what does this tell us? What do these countries have in common? What is our best approach to influence/inform?” To examine the complexity of the issues surrounding the question, the authors take both broad and country-specific approaches. There is general agreement that many Muslims worldwide are undergoing processes of Islamization for religious, social, economic, or political reasons, and that in some cases, built-up grievances have resulted in growing support for extremist movements, such as ISIL. Because each country varies, sometimes significantly, in terms of its domestic situation and its external relations, it is paramount to address those variations in crafting an effective approach to influence/inform.

Kathleen Reedy, a social scientist at RAND, argues that political Islam, of which Islamic extremism is one manifestation, has been gaining support worldwide with its “calls for social and political justice, and its ability to cut across a variety of ethnic lines.” In recent years, populations around the world have developed grievances around their political and economic situations, and in response, have pursued political Islam as a solution. While the circumstances causing grievances vary per country and region, the best approach to mitigating support for extremist groups such as ISIL involves identifying and addressing underlying grievances and delegitimizing groups that espouse military and political violence.

Ini Dele Adedeji, a Junior Teaching Fellow at the School of Oriental & African Studies (SOAS), concludes that the countries under examination have all experienced one or more forms of religious, political, or economic upheaval, which have led to more favorable polling regarding ISIL support. In Syria, dissatisfaction with President Bashar al-Assad has created a Sunni versus non- Sunni divide within the country. That division has led to a dichotomy of “the enemy of my enemy is my political friend” that is sometimes expressed as support for ISIL or another anti-government faction. In Nigeria, Islamist movements have historically aligned with transnational movements as a form of protest against the state. Coupled with growing resentment of the West’s perceived war against Islam, some Muslim Nigerians have chosen to support ISIL, even when they do not condone all of the group’s methods. To influence populations, Dele Adedeji suggests promoting pro-Western sentiment among local clerics and using them to inject jihadist counter-narratives.

Sabina Henneberg, a Ph.D. candidate at John Hopkins University’s School for Advanced International Studies (SAIS), focuses on the intersection of Tunisia’s recent history with international extremist movements and how they are “partially linked to support for ISIL.” Within Tunisia, the main Islamist political party’s move toward democracy and other domestic pushes toward secularism have not led to increased freedoms and civil rights, but rather have frustrated Muslims, intensified local grievances, and increased anti-Western sentiment. In order to improve the situation, Henneberg recommends reducing suspicion of outsiders and promoting capacity- building programming, to include rehabilitation programs for returning fighters.

Laura Steckman, a social scientist at MITRE, provides responses to the three-part question with recommendations for the way ahead. She points out some of the challenges with current polling efforts, arguing for the need to “craft and implement updated survey instruments that incorporate local cultural, social, and political norms and sensitivities in the appropriate languages.” Through a discussion of the Malaysia, Nigeria, and Senegal cases, she outlines how recent experience with Islamization and related ideologies have led to increased support for movements like ISIL outside of the Middle East. In order to lessen the attraction of ISIL or other extremist groups, Steckman recommends multiple campaigns across traditional and non-traditional media per country affected by significant pro-jihadist leanings, tailored to each country’s susceptible populations.

Aymenn Jawad al-Tamimi, a research fellow at the Middle East Forum, provides a more implicit answer to the question with an outline summarizing the macro- and micro-levels of ISIL’s online propaganda. At the macro level, primarily areas outside of Syria and Iraq, early propaganda centered on “the supposed success of the statehood project of ISIL,” while more recent production focuses on the group’s militant activities. At the micro level, “dissemination of ISIL propaganda material on the ground must be considered the primary means of reception…rather than online broadcasting.” Jawad al-Tamimi further expounds on ISIL’s outreach strategy as one of external and internal da’wa (proselytization), where internal da’wa depicts the Islamic State as a strong state that protects Muslims and their rights, and external da’wa, designed to show non-Arab, non- Muslims the power of the Islamic State and of Islam. The purpose and content of ISIL propaganda must be considered in any influence/inform approach.