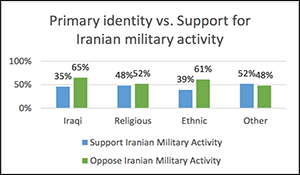 As with all newly formed Arab states following the conclusion of WWI, Iraq struggled to establish an inclusive national identity (Abouaoun, Dagher). Rooted in the Hashim monarchy’s attempts to preserve antiquated patrilineal lines, the rise of Saddam Hussein’s “national republic” in 1979 forcefully instituted a form of non-inclusive Arab nationalism. The success of the Iran-Iraq War (1980-1988) seemingly led to a resurgent rise of a fresh Iraqi nationalism although, in time, this proved to be limited to Iraq’s Sunni population1 (White). The US invasion of Iraq in 2003 once again exposed simmering sectarian tensions, in turn eroding Iraqi nationalism even more (Abouaoun). The establishment of a new Shia ruling elite (post-2003) sowed the seeds of Sunni Arab discontent in addition to opening the floodgates of increased Iranian influence (White). Non-state actors took advantage of the societal decay and positioned themselves as defenders of Iraq’s various sectarian communities (Abouaoun). Non-state actors, emboldened by globalization and the information revolution, were used as proxies by regional powers competing for influence in the region.

There is some consensus among contributors that Iraqi nationalism could be an effective tool to mitigate Iranian influence in Iraq. Today, as cautious optimism emerges from the downfall of ISIS, one recent poll found that 60% of Iraqis see themselves as Iraqis first (Kaltenthaler, Dagher). A significant majority of these nationalists (65%), oppose Iranian military intervention in Iraq against ISIS, and 63% support Coalition airstrikes against ISIS.

Some experts expressed limited optimism that Iraq is approaching an inflection point where the development of Iraqi nationalism can be achieved through competent governance; however, it is not clear how realistic this goal is, given the current climate. To understand this, let us review some of the drivers and buffers of Iraqi nationalism.

What Can Be Done to Foster Iraqi Nationalism?

If an increase of Iraqi nationalism is correlated with a reduction of Iran’s influence in Iraq, several experts note that steps could be taken to allow nationalist platforms to emerge.

Second, Iraqis need a new model of inclusive government (Abouaoun). He noted that, “a ‘spontaneous’ rebirth or boost of Iraqi national identity is a farfetched aspiration.” It can only be achieved through a process that generates a new governance model—only then can national identity mobilize Iraq’s Shias to minimize Iran’s influence in Iraq.

Third, strong and inclusive institutions must be supported by domestic and international efforts to build a stable, interconnected, and diversified economy (Wahab). This should begin with investment in the physical infrastructure that connects Iraqis across the country with one another as well as with economic opportunities (i.e., roads, railroads, pipelines, etc.).

Experts generally agree that rising Iraqi nationalism could play a critical role in countering Iran’s influence. However, nationalism is quite nascent in Iraq (Saeed) and not all experts agree that it currently exists in any significant way at all—let alone with enough strength to minimize Iran’s influence in Iraqi politics (Seloom).