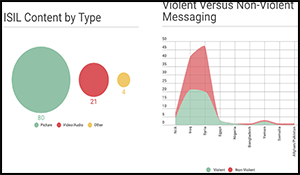 Question (QL5): What are the predominant and secondary means by which both large (macro-globally outside the CJOA, such as European, North African and Arabian Peninsula) and more targeted (micro- such as ISIL-held Iraq) audiences receive ISIL propaganda?

The contributors to this Quick Look demonstrate clearly the breadth and diversity of the ISIL media and communication juggernaut identifying a wide variety of targeted audiences, media forms and distribution mediums for both local and global audiences.

Smartphones are game-changers; the predominant distribution medium globally and locally

There was general acknowledgement among the experts that wide-spread, public access to smartphones has been both a game-changer for both the distribution and production of propaganda materials. Smart devices with web access were also cited by many as the predominant medium by which both global and local audiences receive ISIL propaganda and the catalyst for the fading of former distinctions between means used to communicate with “macro” versus “micro” audiences. Even ISIL messages primarily intended for local audiences (e.g., weekly newsletters) do not stay local; they are digitized and may be found on the internet and thus are available globally.

Chris Meserole a fellow at the Brookings Institution argues that ISIL communicators have benefitted from two particular capabilities that smart devices put in the hands of users: 1) easy access to impactful video and other visual content has enabled ISIL to transmit highly emotive and pertinent content in near real-time; and 2) users’ ability to produce and distribute their own quality images has altered the processes of recruitment and identity formation by making them more interactive: group members who formerly would have been information consumers only, now can readily add their voices to the group narrative by serving as information producers as well.

Although Twitter, and YouTube are still the most commonly used platforms, and especially Twitter can be used for specifically-targeted, micro audiences, Gina Ligon who leads a research team at the University of Nebraska Omaha cautions that ISIL’s cyber footprint extends well beyond these “conventional” platforms which should be considered “mere starting points for its multi-faceted, complex cyber profile.” (See the Ligon et al below for ranks of the top cyber domains ISIL used between August 2015 and August 2016.)

It is important to note that although there is clearly increased local agency regarding production of ISIL communications, the teams from the University of Nebraska (Ligon et al), UNC-Chapel Hill (Dauber and Robinson) as well as Adam Azoff (Tesla Government) and Jacob Olidort (Washington Institute) find substantial evidence of centralized ISIL strategic control of message content. However, once content is approved, a good argument can be made that dissemination of ISIL messages and even video production is localized and decentralized. The result is a complex and “robust cyber presence.”

The most distinctive characteristic of ISIL propaganda is its high quality visual content which are easier to distribute than large texts. It is also easier to evoke emotion with an image than with text. Arguably, the most prolific and widely-distributed propaganda are ISIL’s colorful print and digital magazines (e.g., Dabiq, Rumiyah in English, Constantinople in Turkish Fatihin in Malay, etc.) It is well known that ISIL videos are extremely pervasive and an important form of ISIL messaging. However, multiple experts noted that the sophistication and production value of today’s videos are a far cry from the 2014-era recordings of beheadings that horrified the world.

Not everything is digitized: solely local propaganda forms and mediums

Audiences both in and outside ISIL controlled areas and those outside the region receive ISIL propaganda products. However, there are some mediums and forms of propaganda which can only be delivered in areas in which ISIL maintains strict control of information and in which it can operate more overtly. For example, ISIL has printed ISIL education materials and changed school curricula in its areas, it holds competitions and events to recruit young people, and polices strict adherence to shar’ia law (hisba). It is in this context that Alexis Everington (Madison-Springfield) argues, one of the most impactful forms of ISIL messaging remains its visible actions (of course, the perceived actions of Iraqi government forces, Assad forces, etc. and the US/West are likely equally, if indirectly, impactful). Second in importance are “media engagement centers such as screens depicting ISIL videos as well as mobile media trucks.” Outside ISIL controlled areas, NDU Professor of International Security Studies Hassan Abbas, cites “the word of mouth” including “gossip in traditional tea/food places” as still the primary means by which local audiences receive ISIL propaganda, and many experts agree that the content is “largely influenced by religious leadership.”

Finally, Adam Azoff of Tesla Government offers a caution regarding what happens when ISIL-trained, foreign media operators are pushed out of all ISIL-held areas: as these fighters relocate we should be prepared for the possibility that they would “continue their ‘cyber jihad’ abroad and develop underground media cells to continue messaging their propaganda. Though it will be more difficult to send out as large a volume of high-quality releases, it is not likely that ISIL will return to the amateurish and locally-focused media operations of 2011.”