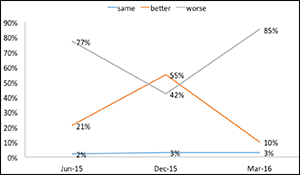 Question (R2 QL1): Have sentiments changed since the December 2014 polling? Have recent IO efforts in Mosul influenced these sentiments? What other means can we use to influence?

Data suggests that sentiment toward DA’ESH1 has changed since the December 2014 polling conducted by USCENTCOM. The SMA team cannot adequately assess recent IO efforts in Mosul due to lack of clarity on programs conducted, their specific objectives, and an understanding of the associated assessment plan. A limited assessment of DA’ESH online propaganda and impacts of US Government (USG) and coalition efforts to restrict this propaganda is provided. Insights for future influence operations are recommended.

USCENTCOM understanding of the population on the ground is significantly hampered by a lack of continued polling and survey research in critical areas of strategic significance. It is clearly possible to conduct this type of research throughout DA’ESH controlled territory as well as other non-permissive environments with proper risk mitigation measures in place. While polling in these environments is dangerous and should not be left to inexperienced staff officers to plan and manage, it provides critical insights for effective operations in the Gray Zone. The first and foremost recommendation in this report is for the Commander, USCENTCOM to personally intervene to obtain the necessary authorities and resources for on-the-ground polling in areas of strategic importance.

Dr. Munqith Dagher of IIACSS, a polling and research firm in the Middle East, has provided independently funded data collected in Mosul between the December 2014 poll and March 2016. These data show that general popular support for DA’ESH increased through December of 2015 and then dropped sharply. As of March 2016, popular support for DA’ESH in Mosul had nearly returned to pre-invasion levels. The SMA could not identify more recent data to support objective assessment.

Atmospherics from IIACSS pollsters indicate that the decline in popular support to DA’ESH is primarily due to increased harsh treatment of the local population by DA’ESH in response to fears of locals providing active support to the Government of Iraq (GoI) and the coalition. They also cite deteriorating economic conditions as a result of low oil prices, closed borders, and economic sanctions against DA’ESH.

DA’ESH’s internet presence has changed over the last year. Their focus has shifted from highlighting positive messages of “Life in the Caliphate” to messages of battle statistics and a narrative that losses on the ground do not translate into the elimination of the Caliphate. It is the opinion of the authors that this shift in narrative is less effective for DA’ESH securing popular support, but may be more effective at reducing military defection and maintaining a source of foreign fighters for their ground campaign.

The USG campaign to remove DA’ESH cyber personas from the internet (e.g. Twitter suppression) may make it more difficult for potential recruits to find, however, it makes it equally difficult to collect information on the DA’ESH narrative, priorities, objectives, and lines of persuasion. Given DA’ESH guidance to members to limit individual accounts suggests that they may be attempting to limit their online footprint as a matter of strategy and not in response to online information operations activities by the USG. Increased restrictions on the internet has resulted in on-the-ground distribution of offline media (CDs, DVDs, etc). There is insufficient data to understand the nature or effectiveness of these materials. It is the opinion of this author that USCENTCOM should pursue a more sophisticated campaign of operational preparation of the environment (OPE) to support a wider range of options for military engagement and foreign policy.

An assessment of individuals who have joined, defected, or provide tacit support to DA’ESH reveal two major reasons for support: governance and ideology. People throughout Iraq seek economic prosperity free from sectarian prejudice. They seek an equitable distribution of government services. The coalition must be prepared to fill the governance vacuum with micro-economic development programs, restore oil revenues, and most importantly ensure that non-local sectarian militias do not take control of former DA’ESH occupied areas. Governance will be more successful if it is decentralized at the local level. As a matter of ideology, Iraqis culturally value dignity and family. Fears of reprisal, treatment of civilians, and the inappropriate use of Islam are cultural levers that can quickly turn the population away from reconstruction efforts. The coalition must prioritize efforts to create checks and balances that monitor and prevent corruption and reprisals.

Although not included in this report, Johns Hopkins University and University of California Los Angeles recently conducted social neuroscience experimentation in Amman, Jordan. One of the findings was that Jordanians and Iraqis in the study resented the use of Islam in persuasive messaging. They also found that the use of Islam provided a more effective influence channel. The coalition must be very careful in whether they use Islam and how they use Islam in any information operations activities. While Islam can provide an effective line of persuasion, it may also develop resentment toward the messenger. It is the opinion of the authors that messaging involving Islam should be left to Muslim non-governmental organizations.

The remainder of this report is organized into four chapters. The first chapter provides on- the-ground data for popular sentiment in Mosul since 2014. The second chapter provides an assessment of DA’ESH propaganda online. The third chapter offers recommendations for future operations in Iraq. Biographies of contributors are provided. These authors can be contacted through the DDGO.