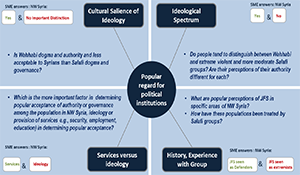 Question (R3 QL6): How will the population in northwest Syria react to future Salafist political institutions?

Similar to points made by other contributors to this SMA Reach-back report, Dr. Kathleen Reedy of Rand includes a caveat in her response to the CENTCOM question. Given international pressure to avoid Salafi expansion in Syria, it is doubtful she argues, that Salafist policies or leaders would be allowed to become dominant over sizeable areas of northwest Syria. Nonetheless, contributors’ input on the likely response to future Salafist political institutions in northwest Syria tends to align with one of two viewpoints: 1) Syrians will reject Salafi efforts to establish political institutions (i.e., to govern); or 2) Salafi governance will be accepted under certain circumstances.

In addition, the experts offer a range of key factors to support either the “reject” or “accept with conditions” conclusions. These factors suggest four areas of inquiry: 1) the cultural salience of Salafism in Syria; 2) the degree to which people differentiate among political groups; 3) popular views of, and experience with political groups; and 4) the relative importance of ideology versus provision of public services.

Questions #1 and #2: The Cultural Acceptability of Salafism & Ideological Differentiation

Professor Murhaf Jouejati of the National Defense University contends that Syrian culture is a more apt foundation for moderate than for extremist Islamic practices. Salafism, which represents the culture of the Arabian Peninsula, is foreign to Levantine culture and as a result Syrians are most likely to reject Salafist institutions or reforms. Jouejati recalls that in the past Syrians living in areas controlled by radical extremists engaged in civil disobedience and demonstrations and sees little reason that these types of activities would not occur in areas taken or retaken by ISIL, Al Qaeda or Jabat Fatah al Sham (JFS). Charles Lister, a senior fellow at the Middle East Institute, adds that even within the opposition there is a preference for the Syrian national movement “initiated by peaceful protesters advocating for moderate ideals, rather than the transnational jihadis like Al-Qaeda.” He warns though that “that dynamic is not necessarily immovable.”

Mubin Shaik of the University of Liverpool provides a variation on this argument. He maintains that in fact Syrians differentiate between Salafists and “Saudi style Wahhabists” so would not necessarily reject all Salafist governors or political institutions. It is the particular Wahhabism of the Islamic State that is countercultural in this area. Finally, Dr. Joshua Landis (University of Oklahoma) warns that the issue of the cultural salience of Salafism in Syria may be becoming moot. While he concedes that many Syrians are “fed up with fundamentalism” because of the harsh treatment they received at the hands of JFS and then ISIL, he argues that over the past six years of conflict the Syrian population has been radicalized as, consciously or not, Salafi ideas and practices have been accepted into their psyches and aspects of their daily lives where they were not necessarily present before.

Charles Lister (MEI) argues that the fall of Aleppo, the moderate opposition’s key safe haven in Syria, had the effect of diminishing popular confidence in moderate civil society. However, because in his view JFS failed to demonstrate its military value to the Syrian revolution it is now seen as “impotent” by local populations and enjoys “only minimal respect” in civil affairs. Mubin Shaik (University of Liverpool) on the other hand, believes that Salafist groups like Al Qaeda and Jabat Fatah al Sham have succeeded in building the foundation for public support of their leadership by encouraging locals to see them as defenders of the interests of the Syria people as opposed to other groups who they peg as the flunkies of the regime or of the West. As a result, Shaik expects that Salafist groups will be accepted by local populations as long as they continue their gradualist approach to instituting socially conservative (Salafist) practices.

Question #4: The Relative Importance of Goods versus Ideology

Finally, in line with the conclusions of other SMA Reach-back write-ups (e.g., see R3 QL5, V7), Joshua Landis (University of Oklahoma) argues that local support for one governing structure over another will not be a function of ideology or religious preference as others intimate, but a function of which government can provide goods and services to its constituents. Landis notes that people in northwest Syria are, and will remain, in dire need of employment, security and education and the government that best provides these goods will receive their allegiance. In a specific instance of this argument Lister (MEI) forecasts that continued civil conflict in Syria will eventually bring the people of the Idlib and Hama governates into the regime’s sights and in urgent need of defense. Lister warns that if the Coalition were to discontinue support for moderate forces, local populations may again see no option but to align with Salafi groups for their defense.

As is clear from the review of their arguments, there is no clear consensus on the prospects for Syrian acquiescence to Salafi authority and/or attempts to govern in the northwest of the country. It is also unclear which factors would be the most important determinants of popular support or rejection of Salafi control. Producing a more definitive answer to the CENTCOM question requires further study and data collection on the ground. In short, in both cases – expectations and critical variables – the jury is still out.

What the experts’ input does suggest however, is arguably more useful than a single, consensus answer to (any) question of popular desire or preference in such a volatile environment. Taken together the experts’ contributions to this report imply a series of important questions that provide a template for assessing or engaging with local preferences for governing structures (e.g., Salafi, Assad regime, or moderate Islamist, etc.) in both Syria and Iraq. Specifically, analysts and planners should tailor and seek to answer the following questions relative to their areas of interest:

The Accept-Reject figure above shows these generic questions tailored for the question of popular support for Salafi political institutions in NW Syria, and provides a useful roadmap for further study and on-the-ground data collection.