US Benefits to Supporting Afghanistan 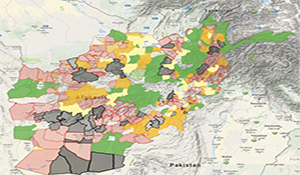 Question (R4.10): Is the current U.S. approach to supporting Afghanistan beneficial? Or does it promote a cycle of dependency and counter-productive activities in the region? What strategic and local factors would need to be considered, managed and accepted in any significant change in military and/or other support?

Asked about any constructive aspects of the current US approach in Afghanistan the experts who contributed to this Reach-back report, to a one responded with lengthy, well-considered but scathing reviews of the past fifteen years of US/NATO policy and operations in Afghanistan. The majority of the experts — who include practitioners and political scientists, historians and hydrologists with years of on-the- ground experience with Afghanistan — felt there is nothing to commend current US policy toward Afghanistan. The others did not address the question.

In fact, most experts took the tack that the current US approach to Afghanistan (which they date to the “mission creep” that began in 2001) is itself the source of the insecurity, instability and Taliban resurgence happening now in Afghanistan.

The US Approach in Afghanistan

The central themes of the experts’ arguments can be summarized in two main points:

#1: State-building efforts detract from the real US interest in Afghanistan: security

Professor Shalini Venturelli (AU) argues that US activities in Afghanistan have drifted away from what is the true national interest in Afghanistan (security) to focusing on governance and state-building. Along with Spencer Meredith (NDU) she argues that the US must refine the focus of its approach to jettison objectives such as state-building and democratization that have distracted the US from issues that we have the relevant power to impact. Venturelli sees no value to US security from getting involved in the highly culturally- dependent issue of how a nation governs itself.

Instead: Venturelli argues in favor of a major reconceptualization of US policy in Afghanistan that focuses strongly on what is truly the core (and only reasonable) US mission there: US security. She suggests “three concrete components” of a reconceived US mission: 1) preventing and deterring terror group gains in Afghanistan by “expanding counter-terrorism operations in the AF-PAL region;” 2) preventing Afghanistan from becoming a major terror safe haven; and 3) building the capacity of the Afghan National Army (ANA) guided by a more sophisticated and culturally relevant training model that taps into the “indigenous fighting tradition” – (what Dr. Shireen Khan Burki refers to as Afghanistan’s “xenophobic warrior” population.) She cautions that continuing with the current approach of incrementally changing the US approach around the margins as circumstances dictate has already had “devastating consequences” and could be worse than withdrawing US military support altogether.

#2: There is insufficient socio-cultural foundation and local trust to support construction of centralized democracy in Afghanistan: These efforts were doomed to fail from the start

The experts who commented on the political or state-building aspects of the US approach did not mince words, referring to it as: “impractical and expensive,” the result of “overconfidence bordering on insanity” and “hopelessly corrupted and detrimental.” Spencer Meredith (NDU) believes that the US approach is based on the faulty assumption that localized/decentralized governance is at odds with a legitimate and capable national government. Others are highly critical of efforts to construct a Western-style centralized political system in Afghanistan with a very feeble foundation in Afghan political history, social organization or culture. It was doomed from the start. Shalini Venturelli (AU) reckons that “not all the wealth and expertise of the US and its NATO allies” would be sufficient to build a sustainable democratic state in Afghanistan because it would be out of line with the social, cultural and political traditions and expectations of the majority of the Afghan population.

Instead: The contributors who commented on this point agreed that rather than Western expectations of good governance and social and political stability, if the US chooses to remain involved in state-building in Afghanistan, its efforts must refocus on the expectations of the Afghan people. Venturelli points out that Afghan society already contains “highly evolved, complex and variable systems of social order that fall outside the capabilities of Western administrative science.” Specifically, Spencer Meredith (NDU) recommends that the US should patiently pursue a bottom-up, culturally and historically grounded approach to political development. Despite the fact he says that analysts in DC and certainly political elites in the central government in Kabul for obvious reasons do not like this option, it is the only one with a reasonable chance of producing a broadly accepted and legitimate government.

Does the US approach promote a cycle of dependency and counter-productive activities?

The majority opinion among the expert contributors to the Reach-back report is that the current US approach in Afghanistan does promote dependency and is counter-productive. Vern Liebl (CAOCL) among others questions why anyone would be surprised by the negative consequences of pouring billions of dollars of donor money into a devastatingly impoverished country. This aid has fueled elite corruption at the expense of the poorest Afghans which has in turn soured public opinion even more on the US-imposed central government and likely aided the resurgence of the popular acceptance of the Taliban. Benjamin Hopkins (GWU) sees the question of Afghan dependency itself is insulting to Afghans arguing that it is the West’s pursuit of “unrealistic policies” in Afghanistan not some Afghani flaw that has generated deleterious cycles. In addition to fueling government corruption for example, US policy has strapped the Kabul Government with unsustainable government institutions including a security force that “is well beyond the ability of the country to sustain. That said, “anti-corruption” measures are not the solution here. Shalini Venturelli cautions that Westerners/outsiders can easily misunderstand local norms of human networking and in correctly label some social-required activities as corruption. Rather than dismissing social influence networks outright, Venturelli recommends leveraging this existing system of relationships to advance security interests in Afghanistan.

What strategic factors should guide changes in US military or other support?

The authors are clear on this point: we cannot assess our strategic approach without a strategic vision. Reflecting the perspectives of her fellow contributors, Shireen Khan Burki asks the essential question: “What exactly is the strategic mission of the US vis-à-vis Afghanistan?” There is consensus among the experts who feel that the US approach has lacked a clear articulation of US goals and objectives in Afghanistan. Many are skeptical that there is a coherent strategic vision or set of mission objectives that would align with all the foreign activities and aid in Afghanistan. At the very least if they have been articulated, they have not been stated clearly in public. The experts pose a number of other questions that might serve as guides to review US policy in Afghanistan: