Views of Sunni and Shia Extremism 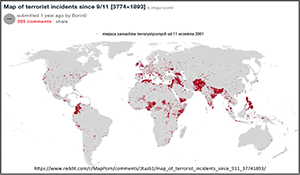 Experts who volunteered to respond to this set of questions did not directly answer how the US and its Coalition partners view Shia and Sunni extremism. However, there was an implicit assumption that the populations of these countries see Sunni extremism as a greater—or at least more visible—threat. However, Alex Vatanka of the Middle East Institute argued that they should both be viewed as equally threatening to US and Coalition interests at home and in the Middle East. Vatanka noted that these two forms of extremism differ in degree of threat and sophistication. While the US has been confronted with Sunni extremism in the form of violent caliphate-seeking groups who also espouse attacks against the far enemy in the West, Shia extremism is an equally pervasive—and perhaps less well understood–threat. It is “tantamount to a totalitarian ideology that will pose a threat to both US interests and those of allies in the region” over time. Vatanka pointed out that the Shia/Sunni split is roughly equivalent in the Middle East, and Shia extremists (back by a powerful, ambitious state, Iran), have the numbers to change the geopolitical landscape in the Middle East. They have arguably already been quite successful in doing so through the use of proxy nations and Shia militias.

Hayder al-Khoei of the Centre for Shia Studies warned against drawing a false equivalency between Shia and Sunni extremism. He noted that these two phenomena differ remarkably in terms of beliefs, range of targets, and methods. High profile terrorist attacks that have been carried out in Europe and the United States were not conducted by Shia extremists. He noted that “there is a religious hierarchy that exists in Shia Islam which has no equivalence in Sunni Islam, this makes the latter more decentralised, fractured and is what enables groups like ISIS to portray themselves as authentic and legitimate representations of Islam.”

According to Hayder al-Khoei of the Center for Shia Studies, Shia communities across the Middle East find the US and Coalition efforts to fight extremism “at best half-hearted and at worst complicit.” There is a fundamental and entrenched belief in the Middle East that the US directly aids and abets ISIS (see also Kaltenthaler & Dagher). Shia communities point to a number of reasons for this belief. Shia politicians in Iraq cite the slow response to the looming threat from ISIS as they bore down on Mosul and other cities in June 2014 as evidence of US collusion. While Shias in Iraq accuse the US of standing by while the threat from ISIS grew, in Syria, Shia observed the US actively funding and arming rebel groups who fluidly shared weapons, funds, and allegiance with al-Qaeda affiliated groups as well as ISIS. Furthermore, Syrian Shia question whether Turkey, a NATO ally, intentionally allowed jihadists into Syria as a way to siphon off troublemakers from European societies. Finally, the United States’ strong relationship with Saudi Arabia—whose promotion of Wahhabism is considered by some as the ideological root of today’s jihadism—is cited as further evidence of US tacit approval and support for Sunni extremism.

Karl Kaltenthaler, University of Akron and Case Western Reserve University, and Munqith Dagher, IIACS, in their work surveying populations in Iraq suggested that Sunnis place a greater amount of trust in the US relationship and its countering violent extremism efforts than Shia communities. Iraqi Kurds, who are largely Sunni, also generally have a positive view of the US, but there is a “significant minority of Kurds who have strong Islamist proclivities and show some sympathy toward ISIL and thus animosity toward the US.”

This polarization was clearly illustrated by a summer of 2016 survey in Iraq conducted by IIACS (Kaltenthaler & Dagher). When asked whether the US/Coalition was in Iraq to defeat ISIS, 82% of Sunni Arab Iraqi respondents agreed while only 32% of Iraqi Shia believed this to be the case. Iraqi Shia attribute US/Coalition action, particularly air strikes, in the region to an anti-Shia campaign. This demonstrates a massive trust deficit between the Shia community in Iraq and the US/Coalition.