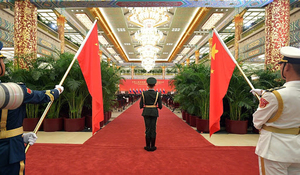 Prof. Ehteshami first discussed the global outreach activities that China is undertaking in Central, West, and South Asia. He focused his brief on China’s Belt and Road Initiative (BRI), through which China is aiming to improve connectivity, the speed of interactions, and security across Asia, East Africa, and Europe. Moreover, China is using its BRI to gain access to natural resources—particularly coal and hydrocarbons—found in West and Central Asia, as well as crude oil, oil products, and natural gas found in the Persian Gulf. Prof. Ehteshami also stated that China sees the Indian Ocean as an area of strategic rivalry as a result of India’s refusal to engage in the BRI. Prof. Ehteshami concluded by encouraging US strategists to be conscious of the dependencies that the BRI creates, as the US may be able to use them to its advantage. Next, Dr. Watson spoke about Chinese engagement in Latin America, due to its energy, natural resources, and food supplies. This engagement reflects China’s desire to secure long-term guaranteed sources of natural resources. She then explained that Latin American countries are increasingly turning to China rather than the US to fulfill their economic needs, as the US is perceived as rapidly losing influence in the region. Therefore, China views Latin America as an area of strategic importance. Dr. Watson also cautioned that China will likely try to pressure and/or create more incentives for Latin American states to further shift their political stance and increase economic engagements. Col Gregory and Dr. Sherlock then examined the prospects for the future of China’s and Russia’s relationship through the lens of their “future elites,” i.e. students from their top universities. Col Gregory and Dr. Sherlock indicated that a robust partnership between Russia and China is unlikely. The Chinese and Russian students surveyed do not believe that their countries share common values. Col Gregory explained that Chinese participants tended to lack respect for Russia and to look down on or express ambivalence about Russia due to its perceived lack of cultural and economic power. These students did acknowledge Russia’s resilience, however. Dr. Sherlock then stated that Russian participants recognized China’s differences in thinking and attitude and expressed that it is difficult to get a read on China due to its closed society. On the other hand, despite some general criticism of US foreign policy, Chinese and Russian students generally expressed respect and often admiration for American values and institutions, revealing the US’s retained influence on Chinese and Russian society.