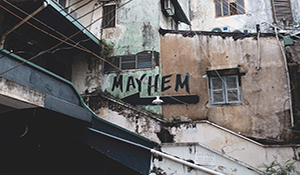 The Army University Press created the Future Warfare Writing Program to generate ideas about possible complexities of future warfare, as presented in the U.S. Army Operating Concept. As part of this program, the Mad Scientist Initiative solicits short stories to help the US Army envision and anticipate changes in warfighting through creative means. Two of our NSI’ers, Ashton Macaulay and John Stevenson, submitted a short story to the competition. Although it was not selected as the winning submission, and at the risk of sounding biased, we think it’s a pretty good read! We hope that you will find it interesting and that it sparks your own ideas about the future of warfighting.

Below is the transcript of an interview with each of our writers, examining their creative process and how their background and training informed this work.

Q: Introduce yourself. Describe how you apply your academic background/technical training at NSI.

AM: I’m Ashton, a data scientist at NSI. My background is in experimental social psychology, and writing is how I spend most of my spare time. One of the first things that attracted me to NSI was the chance to tie psychological concepts to what can otherwise be the very quant heavy field of data science. NSI’s unique mix of professional backgrounds provides plenty of opportunities to harness our unique skillsets in ways that wouldn’t happen elsewhere.

JS: Hi, I’m John Stevenson, a Principal Research Scientist at NSI. Most of my work is with our public-sector clients. My training as a social scientist was primarily in political science and applied statistics. Much of my work focuses on how both non-state actors and governments organize violence to achieve key goals, such as regime durability, regime formation, border control, and economic extraction.

Q. What kind of fiction do you read/write, and does that connect to the way your academic background/technical training shapes your view of the world?

AM: I tend to stick to the sci-fi and adventure genres, with topics ranging from time-travel to monster hunting in the Andes. While I don’t call on social psychology explicitly in my writing, I do think it affects the way I write conflict and characters implicitly. Just understanding the fundamentals of group dynamics and what creates conflict in the world helps make shaping plot feel more natural.

JS: Almost all of the fiction I read now falls into the fantasy genre. I am currently working my way slowly through Stephen Erickon’s ten book series, “Malazan Tale of the Fallen.” Past fantasy loves have been Raymond E. Feist’s “Riftwar” and “Serpentwar” sagas, George R.R. Martin’s “A Song of Fire and Ice” series, and Octavia Butler’s “Kindred.” Before fantasy, my foundations were very solidly sci-fi. My beloved series are: Issac Asimov’s Foundation Series; Ray Bradbury’s “Martian Chronicles”; the Dune Series; Orson Scott Card’s Ender Wiggins Series, as well as the Ender’s Shadow Series.

The fiction I write tends toward more fantastical elements than sci-fi. Some of my recent projects have involved stories about a pantheon of gods building a shared universe together and the conflicts arising among these gods from distinct visions of cosmological organization. Another set of stories more explicitly draws on my political science training to craft a tales about the politics of secession and succession within a fantasy kingdom where key aspects of the current fantasy tropes are explicitly forsworn. For instance: the political geography is not claustrophobic from high density or rival polities, the biodome is extremely heterogeneous (and in some places untamed and dangerous), and kinship ties do not arise automatically from familial descent—heirs are chosen, and often are not the biological children of the nobility.

My academic training causes me to think a lot about violence as something that is manufactured (like a building) by specialists for state ends. Authors like Erickson also have helped me flesh out the agents of the state who are authorized to carry out violence as living, breathing persons themselves, who may or may not understand why they are manufacturing violence on behalf of the state.

Q. Ashton, we hear that you have a book of fiction coming out sometime soon? Can you tell us a bit more about that?

AM: I will be publishing my first novel through Abberant Literature in February of 2018! It’s a love letter to 80s big adventure cinema, following Nick Ventner, a drunken monster hunter who gets conned into going after a yeti deep in the Himalayas. The story is full of dark humor, and plenty of nods to Indiana Jones and my other favorite films. All I can say is I’m incredibly excited to get it out there, and for the hours of 5AM rewrites before work to stop :). For more details, you can check out my website, MacAshton.com, where I post updates, short fiction, and video game news.

Q. The Mad Scientist Initiative prompt concerned the future of warfighting that the DoD might face. What are the chief elements of the story, from your perspective, that addressed the futuristic element? What do you hope an analyst should pick up on and say to himself or herself, “Hey, we should be thinking about that?”

AM: I think the catalyst for this concept for me really centered around overpopulation and the recruitment of normal people into extremist groups, which is something we see already. That, coupled with the runaway advancements in technology means that we’ll have to adapt to a new brand of crime/criminal, which isn’t necessarily what we’d expect. Specifically, our connection to the web and the accessibility of information is only going to improve, and that’s going to open new doors, both good and bad.

Q. What are some elements of your own signature style that you included in the piece for more aesthetic reasons?

AM: No matter what I do, I like to include a bit of humor in it. In all my writing, there’s usually something that scares me, and a way of conquering that fear is to make light of it. Humor for me is a tool to look at a dark situation, understand it, but at the same time not be dragged down by it. I also think it helps keep people engaged, because after all, most of us are reading fiction for pleasure.

JS: Running inside jokes between characters—namely references to Batman—and tensions between colleagues working together are pieces of my signature style of writing that I made sure to work in there.

Q. In some ways, every story is a parable. Beyond the policy implications of the story, what are some aspects of the story that you hope provoke the reader to greater thought?

AM: Again, I think the details that talk about overpopulation are something we should all be thinking of, because in some places it is a reality, and in others, this problem is on its way. The buildings being cramped together so tightly that you can barely see the sky has been realized in big cities around the world. It’s only a matter of time before some of the more ‘out there’ aspects of our story become true.

JS: The story contained references to larger political winds that shaped the operations—namely an intelligence community that limited its accountability to Executive Branch (justified in our story by fear of Russian infiltration of the government) and an AUMF that was being used to provide legal cover for the use of American armed forces abroad—that should be potentially quite concerning to American citizens. Important questions to consider in this vein are:

There are positive notes to the story as well. Where possible, gender-neutral names were used so as not to automatically invoke specific male or female traits into character interaction. In other situations, I specifically pushed for gendered names to show working environments with gender parity, which is not often the case in the policy side of the community. It may be a helpful exercise to note, when you first encounter a name, what you believe is the associated gender, and whether the pronouns, when used to refer to the character, correspond to what you thought.

Q. If you had another two weeks of writing time, what edits or changes, if any, would you make to the story?

AM: I’d want to make it longer and flesh out the characters a bit more. We were working under a strict word limit, which truncated the plot more than I would like. I think there’s an interesting overall narrative that could be built out into something bigger with more time.

Thank you for your time! We hope that our readers enjoyed learning from your answers as much as we did!