Socio-Political Stability in Syria and Iraq 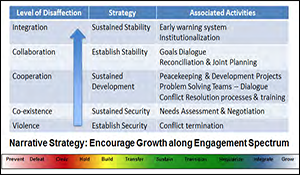 Options to Facilitate Socio-Political Stability in Syria and Iraq.

This White Paper presents the analytic results from Strategic Multi-layer Assessment (SMA) project touching on the Middle East and North Africa. The objective is to suggest options to manage conflict in the region and to facilitate socio-political stability in Iraq and Syria. Options that are discussed are intentionally “out-of-the-box”, non-kinetic, and focused on potential Coalition efforts to:

The findings are the result of the SMA’s standard multi-disciplinary approach and belief that no single discipline by itself can provide a comprehensive approach to this global and regional conundrum. The analyses were conducted unconstrained by policy, legal, and operational consideration and attempts were made to garner insights from historical precedent.

Following are brief summaries of the articles in this white paper.

In his opening article, Mr. Bob Jones (SOCOM) argues that we live in revolutionary times and ISIL leverages the energy in Sunni populations to their advantage. In revolutionary times, revisionist powers see and seize opportunities; while status quo powers tend to be defensive, reactive, and see agents of change as “threats.” Iran saw an opportunity to expand its sovereign privilege across the region with the fall of Saddam Hussein. Al Qaeda saw opportunity to reduce foreign influence, remove corrupt autocrats, and restore dignity to the Ummah; Da’esh saw the opportunity to best AQ in Syria and Iraq by offering “Caliphate today” in lieu of AQ’s more patient approach.

In his article entitled “Managing the Strategic Context in the Middle East: A Preliminary Transitivity Analysis of the Middle Eastern Alliance Network and Its Operational Implications“, Dr. Larry Kuznar advances balance theory to gauge the overall stability of the conflict system that surrounds the battle against Da’esh in Syria and Iraq. This system is characterized by multiple simultaneous conflicts engaging numerous state and non-state groups in the region and from outside of the region. The analysis focuses on the relations between 24 of the key state and non-state actors in this system and indicates that the region is locked in a well-established system of conflict that is likely to persist given the high degree of transitivity in established relationships.

In “An Analysis of Violent Nonstate Actor Organizational Lethality and Network Co-Evolution in the Middle East and North Africa”, Drs. Victor Asal, Karl Rethemeyer (SUNY Albany) and Dr. Joseph Young (American University) use new data that spans the years 1998 to 2012 to model the behavior of violent non-state actors (VNSAs) in the Middle East. Using several statistical techniques, including network modeling, logit analysis, and hazard modeling, they show that governments can use strategies that influence a group’s level of lethality, their relationships with other groups, and how long and whether these groups become especially lethal.

In his “Countering the Islamic State’s Ideological Appeal”, Dr. Jacob Olidort (Washington Institute) discusses an options-focused assessment for policy and practitioner communities in the United States government concerning the ideological threat posed by the Islamic State. The paper examines the possible evolution of the Islamic State in the event that it loses its strongholds in Iraq and Syria, and the nature of the threat it could pose to Western targets and interests. The assessment is based on the recently-published Washington Institute report, Inside the Caliphate’s Classroom, as well as the author’s cumulative research on the texts and ideas of the Islamic State and other Salafi and Islamist groups.

In their paper entitled “Framework for Influencing Extremist Ideology”, Drs. Bob Elder and Sara Cobb (GMU) discuss negotiation research, drawing on rational choice theory which provides a wealth of findings about how people negotiate successfully. They also describe some of the pitfalls that have been associated with negotiation failures. Building on narrative theory, they attempt to expand the theoretical base of negotiation in an effort to address the meaning making processes that structure negotiation as the basis of a framework for influencing extremist ideology. This research is combined with decision-related research conducted in support of deterrence planning as a means to discover potential influence levers for possible use as a counter to extremist ideology. Recognizing that conflict resolution is complicated because it involves changing the story from within the interactional context from where it arises, the framework assumes a staged approach to address the narrative structure of the ideologically-based conflict which anchors the influence actions on the strategic positions and identities, embedded in the narrative logics of the key characters.

The focus of the article entitled “Off-Ramps for Da’esh Leadership: Preventing Da’esh 2.0”, by Dr. Gina Ligon, University of Nebraska Omaha and Dr. Jason Spitaletta, The John Hopkins University Applied Physics Laboratory is two-fold. First, they discuss the underlying theory of TMT (Top Management Team) collaboration, and provide practitioners with some tactics to foment barriers and distrust to aid the operations meant to degrade the organization (e.g., retaking of Mosul). Second, given their analysis of what motivated each of these leaders to join and remain in Da’esh, they provide a set of tailored off-ramps to be considered to deter captured leaders from reconstituting Da’esh 2.0.

In their article entitled “Comprehensive Communications Approach,” (excerpted from their 2016 report, “Examining ISIS Support and Opposition Networks on Twitter,” available at http://www.rand.org/pubs/research_reports/RR1328.html), Drs. Todd Helmus and Elizabeth Bodine- Baron (RAND) argue the Islamic State in Iraq and Syria (ISIS), like no other terrorist organization before, has used Twitter and other social media channels to broadcast its message, inspire followers, and recruit new fighters. Though much less heralded, ISIS opponents have also taken to Twitter to castigate the ISIS message. Their article draws on publicly available Twitter data to examine this ongoing debate about ISIS on Arabic Twitter and to better understand the networks of ISIS supporters and opponents on Twitter in order to craft more effective counter-messaging strategies.

Finally, in “A Human Geography Approach to Degrading ISIL” Dr. Gwyneth Sutherlin (Geographic Services Inc.) argues that stabilizing the region and degrading ISIL will be an international effort with geopolitical and large network engagements. Ultimately, the activities proposed will have an impact for families and their homes on the ground in Syria and Iraq; therefore, the perspectives and priorities of these populations should be foregrounded in any approach, including the involvement of key stakeholders from the earliest possible phase, to lay the groundwork and build partnerships for the long-term stabilization process.