How Should Space Feature in US Deterrence Strategy 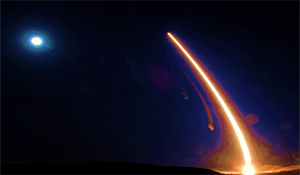 [Q14] How should space feature in US deterrence strategy? How do space operations, policies, and investments impact multi-domain deterrence? What changes to US deterrence thinking are required to incorporate the space domain? To what extent should space adopt deterrence strategies from other domains? Which is the most critical US national security objective: deterring aggression from space, through space, or in space? A Virtual Think Tank (ViTTa)® Report.

This report summarizes key points from 27 insightful responses contributed by space experts from industry, the US government, academia, think tanks, and space law and policy communities. These also include expert contributions from non-US voices from Australia, France, and Italy. While this summary response presents an overview of the key subject matter expert insights, the points summarized below cannot fully convey the fine detail of the expert input provided, each of which is well worth reading in its entirety.

How Space Features in US Deterrence Strategy (It Is Integral, but…)

Marc Berkowitz of Lockheed Martin and the team from ViaSat, Inc. articulate an underlying presumption that appears in most of the expert contributions to this report. Namely, that strikes against space and cyber assets (whether on orbit or on the ground) will almost certainly feature in the earliest stages of future conflicts. Consequently, there is broad consensus among contributors that space systems should be a “prominent feature” of US deterrence thinking and policy; that they are now integral to the strength of the economy, to US and allied defense in all conflict domains, and are essential facilitators of cross-domain operations. Differences of opinion emerge, however, over what that critical importance implies for US defense postures and policy involving space. Here, two schools of thought emerge regarding whether the exceptionality of the space domain requires a deterrence strategy specifically for space (what we will call ‘space deterrence’) or whether talking about deterrence of space assets independent of deterrence in all other domains is meaningless (i.e., ‘deterrence involving space’).

The arguments of contributors5 favoring a space deterrence policy tend to rest on the contention that space is so integral to US national security that it demands a distinct space deterrence policy, albeit one that is ultimately integrated with other defense doctrine and policy. The focus for this group is deterring aggression against specific military space capabilities.

Space Is Just Another Domain

However, for the majority of contributors—proponents of the ‘deterrence involving space’ school of thought— the appropriate question is how to deter aggression in any domain and using any source of national power. This line of reasoning holds that space is so indelibly intertwined in all national security activities that the idea of a separate “space deterrence” is nonsensical. Rather, these contributors— including scholar, government, and commercial views—echo the sentiment of Major General (USAF ret.) James Armor of Orbital ATK that space is “just another medium of national power” and agree with General Hyten’s belief that “there’s no such thing as war in space; there’s just war.”

How Is This Accomplished? (Hegemony Versus Collective Management)

There were also two schools of thought on what contributors considered reasonable and achievable goals regarding defense of space assets. The first group believes that space superiortity or dominance in space is critical to US and ally defense and thus demands a space policy and posture directed toward retaining US military hegemony there. Jonathan Fox of DTRA points out that potential US adversaries are already working to exploit US dependence on space and calls for a space policy based on “anticipatory self-defense,” while Sergeant First Class Jerritt Lynn of United States Army Civil Affairs argues that US interests are best served by retaining “hegemonic dominance” in space. Lynn caveats his support for a policy of maintaining US space superiority by reminding the reader that “the image of the US amongst the international community affects US power and legitimacy” and asserts that “the United States must use international space relations to create a narrative that showcases how the US is a steward of an open, secure, and reasonably regulated domain.” Lastly, Jack M. Beard from the University of Nebraska College of Law states his argument in terms of the current reality: “The US Air Force has a mission to defend our assets in space and to disable or restrict the other country from operating in space if such actions become necessary in an armed conflict. So, the US Air Force has to have the ability to establish supremacy when it needs to, and it has to be able to control space if that is what is required in order to achieve its mission in an armed conflict.”

The alternative view is that achieving space hegemony, dominance, or superiority is not only infeasible, but the act of pursuing such a goal itself is likely to reduce rather than enhance US security. Many of the experts that take this position mirror the argument of French researcher Dr. Xavier Pasco of the Fondation pour la Recherche Stratégique that also represents current reality: “Space remains an environment that cannot be fully controlled.” As a result, many of the experts suggest that the US must move toward collective international management, in large part by taking the lead in establishing international security norms for space.7 Colonel Dr. Timothy Cullen of Air University offers an economic argument regarding the importance of approaching space as a global commons and establishing international norms to manage conflict when it arises. He notes that to date commercial and other activities in space “are financially viable because there remains little need for expensive security measures. It is in US interests for conditions to remain that way.”

The Issue of Credibility

Space effects and services go directly to US capabilities to attribute attack and retaliate, and thus to the credibility of deterrent threats. For example, capabilities like space situational awareness support the credibility of threatened retaliatory strikes on Earth. Berkowitz reminds us that “space systems have been integral to nuclear deterrence for years” and more recently are critical components of conventional deterrence as well. Many of the experts argue that space capabilities significantly enhance the credibility of US deterrence in all domains.8 Dr. Damon Coletta and Lieutenant Colonel (USAF ret.) Deron Jackson (United States Air Force Academy) point out that given the possibility of causing military and potentially economic devestation without necessarily causing loss of life, the response principles and means of escalation control have not yet been well-understood or articulated. As a result, what is required for the credibility of deterrent threats may be different in space than in other domains. Similarly, Fox recommends that the credibility of US deterrence strategy must be shored up with well- articulated response options to a clearly defined series of threats, for example to “national and allied space-based systems, personnel, property, and interests critical to the functioning of core military or civilian societal functions.”

However, the expense of space assets and the US dependence on them may suggest that the credibility of a US threat to take kinetic action in space is difficult to maintain. Cullen argues that “US postures to deter aggression in space with force will be counter-productive and hardly credible … kinetic operations in space risk environmental catastrophe.” Other experts argue that deterrent credibility comes from the ability to threaten retaliation in other terrestrial domains. This, in fact, is the US advantage when it comes to deterrence involving space.

How Do Space Operations, Policies, and Investments Impact Multi-Domain Deterrence?

The majority of the experts appear to reject the basic premise of this question. To make this case, a number of experts highlight the historic interdependence between space assets and capabilities to produce military effects in other conflict domains. With respect to multi-domain deterrence, the contributors see space not only as a critical enabler but in many cases, the critical enabler. While most emphasize additional positives that space capabilities provide to decision makers, like more expansive warning and a wider range of deterrence options, others highlight the added vulnerabilities that relying on space presents (e.g., an additional domain to manage/defend or the greater cost to the US than adversaries of conflict in space).

What Changes to US Deterrence Thinking Are Required?

Although they clearly have different views on other issues, the SME contributors universally point to the prominent place of space within US deterrence and strategic options. Rather than changing how we think about deterrence, Dean Cheng of the Heritage Foundation begins by reminding us that simply changing the way we think will not be enough to forge an effective deterrent including space. Rather, key conditions must change—namely the obvious dependence of the US security establishment on space assets. In this context, there are a number of suggested changes to thinking as well. Berkowitz, Coletta, and Jackson assert that the first hurdle is for the national security space community to move beyond the post-Cold War notion that the dissolution of the Soviet Union would ameliorate the space threat. Experts also remark on the urgent need for policy makers to shore up deterrence effectiveness by clarifying for ourselves, our allies, and potential adversaries what the US considers a provocation with regard to space systems. These new bounds of behavior should be followed quickly with demonstrations of US resolve to respond.

Primarily experts classified as academics and policy researchers admonished the defense establishment to rethink what they consider to be the critical components of deterrence as it relates to space or otherwise. Namely, these contributors advise that policy makers pay serious attention to the role and formation of international norms as critical features of US deterrence.10 Similarly, quite a few experts question the applicability to the space domain of notions of deterrence as punishment, especially where kinetic actions are involved. Rather, as Dr. Nancy Gallagher of the Center for International and Security Studies at Maryland argues, when thinking about deterrence involving space, one should consider the “cooperative dimension” of deterrence, not just deterrence as punishment. Finally, the contributing experts from ViaSat, Inc. make the point that the national security establishment in the US might take a page from the commercial and private sector playbooks with regard to updating thinking about space- related deterrence or strategic thinking. They point out that these space communities should not think of space systems such as space situational awareness (SSA); positioning, navigation, and timing (PNT); or communications assets as existing “exclusively in space or the space domain,” but consider them to be “complex ecosystems that exist in multiple domains.” The ViaSat, Inc. experts add that the least attributable, lowest cost, and most effective attack to a space ecosystem could likely not occur in space, and this needs to be considered in regard to the defense of space ecosystems and their space based assets.

Borrowing From Other Domains

There is no single conflict domain that shares the characteristics of space completely. While a number of the experts reference deterrence concepts from other domains that might be used to inform deterrence strategies involving space, most also echo Fox’s caution to avoid “unerring straight-line extrapolation” from other domains to space. Still, as shown in the table below, insight may be gleaned from experience and thinking in different domains for specific conditions. For example, deterrence questions about the impact of difficult attribution on the credibility of deterrent threats might be illuminated by submarine or cyber deterrence operations. Space deterrence problems that involve single or limited attacks that can cause large numbers of fatalities may find applicable instruction in nuclear deterrence thinking, while circumstances in which mass effects can be produced without direct loss of life might be informed by literature on cyber deterrence.