Strategic Implications of PRC’s Base in Djibouti 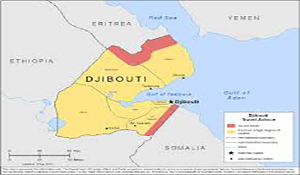 Question (R5.6): What are the strategic implications of the People’s Republic of China (PRC’s) new base in Djibouti? What will be the effect on the Iran-PRC relationship?

There are a number of legitimate reasons that account for China’s decision to break with decades of tradition when it established its first foreign military base in Djibouti in 2009, according to Dr. John Garver, Professor Emeritus at the China Research Center at Georgia Institute of Technology. First, China has a strong economic interest in protecting vital shipping lanes that pass through the nearby Gulf of Aden (Garver, Haddad-Fonda, Payne). Notably, China expanded its maritime security role in the northwest Indian Ocean during the 2008-9 financial crisis in North America and Europe—a time when China’s economic growth seemed “unstoppable” (Garver).

The second stated reason for the base was to support China’s international humanitarian operations, according to Dr. Kyle Haddad-Fonda, an expert in China-Middle East relations. China has an interest in protecting the large number of Chinese citizens now living in every country in Africa and the Middle East. China prides itself on its ability to protect its citizens overseas and extract them from dangerous situations.

Looking beyond China’s stated reasons, our contributors noted three particular strategic implications of China’s decision to build its first base outside of the South China Sea.

Signal of China’s Intent to Rise to Asia’s Preeminent Power. No longer content to dominate the South China Sea, the base signals China’s intent to exert strong influence in the northwest Indian Ocean as part of its long-term plan to become Asia’s preeminent power, according to Dr. Garver. However, he cautioned that China does not see itself as becoming a dominant power in the Persian Gulf and Arab Sea, preferring instead that a non-hostile power such as the US, Iran, or maybe even Russia (but certainly not India) take leadership in that conflict-prone region.

Strengthens China’s Capability for Sustained Operations in the Arabian Sea. China’s base in Djibouti also extends its capability to conduct sustained operations in the Arabian Sea (Garver). It suggests that China might be interested in establishing additional People Liberation Army – Navy (PLAN) supply points—or even bases—to serve in a time of war (Garver). Mr. Jeffrey Payne, a China expert at Near East South Asia (NESA) Center, suggests that the base may “serve as a staging point and communications hub for PLA forces engaged in military operations other than war (MOOTW).”

Does Not Mean China Will Become Involved in Middle East Conflicts. While the base is positioned to serve as a platform for extending China’s influence and reach into the northwest Indian Ocean, it is unlikely that China will increase its already reluctant participation in counterterrorism operations or take greater responsibility for the security of the commons, Mr. Payne argues. It is instead intended to project strength in the Arabian Peninsula and shore up its power in Africa.

To answer the question about the base’s effect on the PRC-Iran relationship, we have to look at a more comprehensive picture of China’s desired outcomes. China is positioning itself to become the dominant power in Asia and a global maritime power (Payne). To extend its reach, it will need to establish reliable relationships with the governments of nations that have strategic, overland, deep water ports, namely: Myanmar, Pakistan, and Iran (Garver, Payne). Djibouti itself would not be useful during war with the US or India because China lacks overland access to the base (Garver).

China is actively building relationships and influence with these three countries as part of its One Belt One Road (OBOR) initiative (Garver). Of the three partners, Pakistan would be the most reliable partner in a conflict with India (if the US remained neutral) (Garver). However, Pakistan would not be willing to enter into a war with the US. Myanmar is a less ideal partner due to its long history of neutrality between India and China and a historical suspicion of Chinese motivations (Garver).

This brings us to Iran. China has a complicated relationship with Iran. Iran would be a reliable partner in a war, but China is cautious about developing strong ties with the country that might upset its relationship with the US, which it sees as fundamental to its economic growth (Garver). The thawing of the relationship between the US and Iran during the last two years of the Obama administration opened the door for China to increase its ties to Iran, which it did through its OBOR initiative (Garver). While China does not want to get drawn into conflicts in the Middle East, its growing ties with Iran threaten this (Payne).

Implications for the USG

In considering what the base means for USG interests in the region, it is helpful to look across a spectrum of time. In the short term, US interests in the Middle East are not undermined by China’s presence in Djibouti (Payne). However, in the long run, the base signals that China is intensifying its global ambitions in terms of its desire to be the dominant power in Asia—both maritime and economically. OBOR is viewed by some as an effort to create an alternative to the US-led international system (Payne). As a potential gray zone threat,1 Mr. Payne asserts that while “China’s base does not pose a direct challenge, … it serves as a clear reminder that China is using our very security system to undermine our position without confrontation.”