The Drivers of Grievance and Unrest in the World’s Populations: Understanding Instability, Terrorism, and Migration 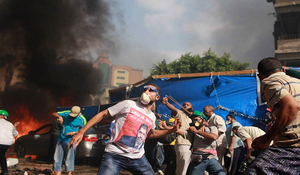 “The Drivers of Grievance and Unrest in the World’s Populations: Understanding Instability, Terrorism, and Migration“

SMA hosted a speaker session presented by Dr. Lawrence Kuznar (NSI, Inc.) as a part of its SMA DHS CAOE Speaker Series. During his presentation, Dr. Kuznar discussed his team’s findings regarding the drivers of grievance and unrest among the world’s populations, particularly as they relate to instability, terrorism, and migration. He first spoke about the primary inspiration for his team’s research: SMA’s “Age of Disruption” white paper. This white paper suggests that populations are key battlefields in global power competition, as great powers vie for the allegiance of populations, manipulate the grievances of these populations, and have objectives that can be frustrated by social unrest among these populations. He also stated that the Political Instability Task Force’s (PITF) work on social unrest events and predicting instability inspired his team’s work as well. Next, Dr. Kuznar conveyed that the purpose of NSI’s aggrieved populations project was to anticipate the operational environment from 2019 to 2029 by identifying emerging regional and non-state challenges. This effort was broken up into two phases: a global analysis phase and a country-specific analysis phase. He then presented a notional graph depicting the distribution of social status and wealth of a typical society and explained the concepts of risk aversion and risk acceptance. For the remainder of his brief, Dr. Kuznar discussed his team’s results, beginning with those from his team’s global study, which included the following: 1) Political instability is driven by hunger, risk acceptant elites, the interaction of fuel export and corruption, weak democracy, mountainous terrain, economic isolation, and ethnic division; and 2) migration from undeveloped countries is driven by hunger, a youth bulge, homicide, and political oppression. He concluded by discussing the results of their country-specific study, which included the following: 1) Countries with low inequality, such as Finland, are stable; 2) countries with unusually high levels of inequality, such as Honduras and South Africa, are characterized by extremely high levels of interpersonal violence; and 3) agrarian countries have extremely high levels of inequality and consequently experience unrest in rural areas, which in turn is exacerbated by rural/urban inequalities (Afghanistan, Pakistan, Honduras, Nigeria, and Ethiopia are good examples).