The Global Struggle for Strategic Advantage in ICT 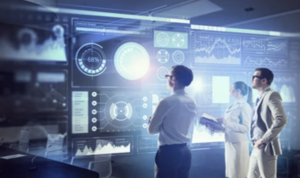 Mr. Montgomery began the group’s presentation by stating that China has purposefully acted maliciously towards the US by using information operations (IO) that are consistently below the threshold for kinetic reprisals. An example of China’s malicious activity is its installation of malware on hard drives that are being exported to the US. In response to China’s low-level malicious activity, one of the Cyberspace Solarium Commission’s objectives was to build appropriate escalation thresholds. However, according to Mr. Montgomery, the command most effected by China’s IO, US Cyber Command (USCYBERCOM), is undermanned, overworked, and undertrained. Making USCYBERCOM’s task more difficult, the US no longer has a strong strategic advantage in information and communications technology (ICT). Mr. Montgomery stated that ultimately, the USG needs to cooperate with the US private sector and its allies to counteract China’s growing presence in the information environment (IE). He then added that that the success of this strategy relies on five pillars, which include 1) identifying key technology equipment, 2) ensuring that the minimum resources required for manufacturing to take place are present, 3) protecting the US’s supply chain, 4) stimulating its own domestic market, and 5) ensuring its long-term global competitiveness.

Next, Mr. Morgus called attention to the fact that as recently as 2000, the US was the world’s leader in creating global network technologies, primarily due to the work of its largest ICT company, Lucent. However, as a result of poor business deals and scandals, Lucent’s prominence shrank, and the company was absorbed by Nokia in 2016. Mr. Morgus then stated that the largest barriers preventing the US from becoming the largest innovator in ICT again are a lack of research and development (R&D) funding, strong barriers to investment, US industrial standards, and US intellectual property (IP) security. Another barrier, and also a security concern, for the US is that it has decreased the amount that it invests in hardware, which is now mostly produced in China. To conclude, Mr. Morgus identified five additional pillars—this time, for how the US can decrease its reliance on hardware built in China: 1) government review of industry consultation, 2) a reinvigoration of the US’s R&D funding, 3) the creation of a national security supply chain center, 4) the stimulation of the domestic economy, and 5) the insurance of a competitive global market.