The Return of Great Power Rivalry: Democracy Versus Autocracy From the Ancient World to the US and China 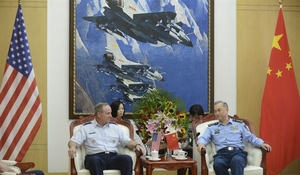 SMA hosted a speaker session presented by Dr. Matthew Kroenig (Georgetown University) as part of its SMA General Speaker Series. Dr. Kroenig’s brief focused on his book, entitled The Return of Great Power Rivalry: Democracy Versus Autocracy From the Ancient World to the US and China. During his brief, he contended that the foremost threat the US is facing today is the return of great power rivalry between Russia and China, two autocratic adversaries. However, democracies have balance in long-term great power competition, and although the US system has its shortcomings, its fundamentals are stronger than both Russia’s and China’s, and it is in a good position to maintain its position of leadership in the foreseeable future. He reached this conclusion by first discussing the theoretical advantages and disadvantages of both democracies and autocracies, then moving into seven case studies of democracies versus autocracies from the ancient world to present day, then finally discussing what this means for the US, Russia, and China today. Dr. Kroenig began by examining the sources of international power today to predict whether the transition of power between a declining US and a rising China is likely to continue taking place. He explained that to amass power and influence internationally, a state must be strong economically, diplomatically, and militarily. He elaborated that the domestic political institutions of a country feed directly into these three areas and therefore are the key sources of that country’s strength; the economic, diplomatic, and military facets are simply manifestations of those political institutions. Dr. Kroenig then stated that democracies promote stronger domestic institutions than autocracies do due to their openness to economic growth and innovation, stronger diplomatic alliances and international commitments, and historical military effectiveness. Autocracies spend a large percentage of their resources and effort managing and oppressing their own people and therefore cannot properly allocate attention to actually be competitive on a global scale. Next, Dr. Kroenig cited evidence from global powers throughout history, from the Roman Republic, to the British Empire, to the United States. In Long Cycle Theory of the rise and fall of great powers, leading states of the last 400 years (i.e., the Dutch Republic (1609-1712), the British Empire (1713-1945), and the United States (1945-1986)) have been the most open republics during the time. This fact is remarkable in that in 1945, there were only 12 established democracies at the time. Finally, when looking at the state of great power competition today, Dr. Kroenig asserted that the US, while threatened by China and Russia, has much stronger domestic political institutions that contribute to its economic, diplomatic, and military strength. Russia’s economy is corrupt and highly dependent on natural resources, its alliances are weak and rooted in disinformation, and it spends more on domestic security than an outward facing military. China, while economically strong, is unwilling to make economic reforms; its alliances formed as part of its Belt and Road Initiative (BRI)provoke global backlash; and its military has questionable effectiveness. Dr. Kroenig concluded by making the “hard power” case for democracy, emphasizing democracies’ ability to generate wealth and power and outlining the advantages of democracies in long-term great power rivalries.

Note: We are aware that many government IT providers have blocked access to YouTube from government machines during the pandemic in response to bandwidth limitations. We recommend listening to the audio file (below) or viewing the recording on YouTube from a non-government computer, if you are in this position.