The Role of Europe in the New Great Power Competition 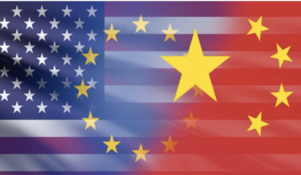 SMA hosted a speaker session, presented by Rector Federica Mogherini (College of Europe; Former High Representative of the European Union for Foreign Affairs and Security Policy), as a part of its SMA INSS/PRISM Speaker Series.

To begin, Rector Mogherini stated that many European leaders believe that the US is returning to a more cooperative stance with the EU and NATO. She explained that the US’s cooperative relationship with Europe can be traced throughout history, which has created a sense of community across the Atlantic until recent years. Reinvigorating this sense of community will be important for how the US and European nations handle mutual security and economic challenges. Rector Mogherini believes that if the US returns to multilateral cooperation from its recent mercantilist policies, then the US and the EU can shape global policies together. Potential areas of cooperation for the US and its allies in the EU (and NATO) include Russia’s interference in Eastern Europe, decreasing conflict in the Middle East, climate change, and ending the global pandemic. However, Rector Mogherini did acknowledge that while it is assumed that President Biden’s administration will move away from more isolationist policies, upcoming election cycles in European countries can also influence the US’s bilateral relationships with both the EU and NATO.

Rector Mogherini then pointed out that while there are areas for cooperation between Europe and the US, there are still areas that might result in competition as well. These areas of potential tension include differing views on China’s global role. She believes that while the EU views China as a systemic rival, it believes that China can and should be considered as a cooperative economic and security partner, whereas the US wants to limit China’s influence on policy altogether. The EU will also likely continue a policy of partial European autonomy, in which it will act separately from the US when it believes the US’s decisions do not represent its core values. However, Rector Mogherini ended her presentation on a positive note by stating that the perception that the US is ending its more isolationist policies has created a reinvigorated sense of hope for new multilateral cooperation between the US and the EU.

1. We had some technical difficulties during the Q&A portion of the brief, so unfortunately we had to conclude the session early. We apologize for the inconvenience.

2. We are aware that many government IT providers have blocked access to YouTube from government machines during the pandemic in response to bandwidth limitations. We recommend viewing the recording on YouTube from a non-government computer or listening to the audio file (below), if you are in this position.