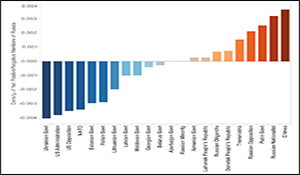 Identification of Security Issues and their Importance to Russia, Its Near-abroad and NATO Allies: A Thematic Analysis of Leadership Speeches.

This study addresses key questions posed in the SMA EUCOM project by using thematic analysis of speeches from leaders of state and non-state polities in Eastern Europe, Russia, and the Caucasus. The importance of an issue is measured by the density (mentions/words in speech) with which it is mentioned and the use of associated emotive language.

Regional Outlook
Q04. Who are Russia’s allies and clients and where is it seeking to extend its influence within the EUCOM AOR?

Analysis of how strongly Russia’s allies express their allegiance to Russia and Russian culture indicates that Crimea is Russia’s staunchest ally. Transnistria also expresses a strong allegiance to Russia, followed by Donetsk. Luhansk and Armenia express pro- Russian sentiments, but only weakly.

Q10. How does Russia see its great power status in the 21st century?

Russian leaders do not mention aspirations for super-power status. Russia’s desire for great power status should be treated as a hypothesis that requires testing – it should not be assumed.

Q20. How might Russia leverage its energy and other economic resources to influence the political environment in Europe and how will this leverage change over the next 15 years?

Economic issues rank high in Russia’s security concerns. They express concern over the value of their energy resources, indicating that it is a key value. They often mention the reliance of European nations on Russian energy. To a lesser extent they mention expanding markets for their energy to Asia.

Media and Public Opinion
 Q07. Conduct analysis of open source Russian media to understand key frames and cultural scripts that are likely to frame potential geopolitical attitudes and narratives in the region.

Cultural Frame: A key cultural frame that Russia and its allies use is their history of overcoming odds against aggressive adversaries to uphold their Russian independence. References to the need to defend Russians from the Nazi threat (historically and today) are used. Emotive Frame: Russia sees the US and NATO as a threat, and state that the US is conspiring against them.

Q08. How much does the U.S. image of Russia as the side that “lost” the Cold War create support for more aggressive foreign policy behavior among the Russian people?

Russia and its allies do not speak of losing to the West, but blame past leaders for giving away their power. Some leaders express nostalgia for Soviet power.

As expected, Russian Nationalists, express nationalist sentiments strongly. However, both Putin and Lavrov use Russian nationalist arguments to some degree.

NATO
Q16. If conflict occurs, will NATO be willing and able to command and control a response?

The larger EUCOM effort integrates different teams’ findings in terms of how they relate to security issues, economic issues, domestic constraints, and prestige.

The security issues and themes identified through thematic analysis can be binned under these four interest areas and their densities analyzed. The Putin government exhibits the following patterns: