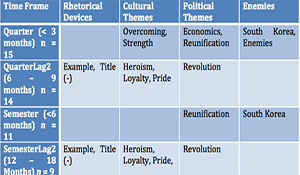 Hours after the Washington Post broke the story that North Korea may have miniaturized a nuclear warhead, enabling its ICBM to deliver a nuclear blow to U.S. soil, President Trump announced that if North Korea continues to provoke, will be met with fire and fury like the world has never seen.” About two hours after that, North Korea responded that they were “carefully examining” plans for a missile strike on the U.S. Pacific territory of Guam. This was met by a boast from President Trump that the U.S. nuclear arsenal was more powerful than ever before. Senator John McCain, commenting on President Trump’s messages said, “That kind of rhetoric, I’m not sure it helps,” and described the situation as, “very, very, very “They serious.” Is this escalation of words catapulting the world to nuclear war?

 Ongoing research highlights subtleties in Kim Jong Un’s use of language that indicate a distinct possibility that he could easily be provoked to a nuclear confrontation. However, this depends on an accurate assessment of the North Korean leader’s state  of mind.

Indicators and warnings (I&W) in public speeches indicate national leaders’ intentions to test nuclear devices and missiles, and these I&W have been corroborated for Indian and Pakistani leaders as well as Kim Jong Un. Key indicators include expressions of pride, strength and overcoming. Understanding how these I&W are contextualized in a leader’s worldview is key to understanding what they might mean.

North Korea’s founder, Kim Il Sung, created a state religion, Juche, which frames North Koreans’ worldview and involves Korean nationalism, absolute obedience to and sacrifice for a strongman ruler, worship of the Kim family and an unending Manichean struggle against evil imperialists (West and Japan especially). Kim Jong Un relies extensively on Juche to frame all of his political messaging.

Kim Jong Un’s use of Juche religious themes nearly perfectly tracks his escalating nuclear weapons capability. In other world leaders, religious language has signaled openness to peace negotiations. The correlation of Kim Jong Un’s use of religious language and his testing seems contradictory, and potentially gives hope that he  may be open to peace negotiations. However, worldview can radically change the meaning of these indicators.

Research on terrorist attempts to acquire and use weapons of mass destruction provides insight into how Kim Jong Un views this escalating situation. The key triggers that cause terrorists to pursue WMD are perceived need for extreme tactics, a mindset that favors simplistic solutions, and adherence to a religious ideology that stresses control, anger and identity politics. These characteristics appear to apply to Kim Jong Un entirely. Therefore, rhetoric and actions that reinforce his worldview are likely to cause him to escalate his own rhetoric and aggressive action. The consequences directly imperil the lives of 25 million South Koreans only 35 miles from the border, over a hundred million Japanese, and perhaps Americans in Guam or the lower 48.