US Action and Inaction in Lebanon: Charting the Best Course for US Interests in Great Power Competition 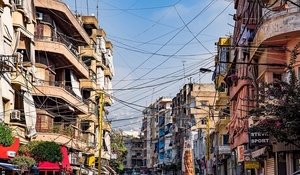 Despite significant challenges to its stability, Lebanon has long survived politically and economically. Nonetheless, poor governance and a severe economic crisis, coupled with ongoing public outrage, signal that the Lebanese government may no longer be able to withstand its enduring pressures. In this report, we consider two recommendations for how the United States should react to the current situation in Lebanon: continuing aid and political support while exerting diplomatic pressure, and limiting aid and political support to the government while supporting those who would disrupt it. Expert observers are largely oriented toward maintaining aid (primarily through assistance to the Lebanese Armed Forces [LAF]) and political support. Underlying this recommendation is the belief that the LAF can be distinguished from the political elites, most notably, Hezbollah. Though less commonly proffered and more controversial, it is important to similarly consider the logic underpinning the latter recommendation, as it reflects certain political realities within the United States. This recommendation is predicated on the view that all Lebanese political actors—whether individual politicians, Hezbollah, the security forces (viz., Internal Security Forces, LAF), or otherwise—remain tied to the sectarian system and are therefore all inextricably linked through this system as an organizing principle. According to this viewpoint, the LAF may consequently be unlikely to provide a significant counterweight to Hezbollah.

While there is some disagreement over Russia’s motivation to engage with Lebanon, several experts indicate that Russia not only would stand to gain from involvement in Lebanon but has been purposefully positioning itself for such involvement, which is arguably motivated by competition with the US. While there is no inherent Lebanese motivation to ally with Russia, the Lebanese are likely to be practical and act in their own self-interest during this period of crisis. A frequent refrain among observers considering US actions that could cause Lebanon to fall into Russia’s orbit is that cutting funding to Lebanon and to the LAF in particular at this juncture could leave Lebanon susceptible to exploitation by US adversaries, including Russia. More generally, US disengagement from the region may present an ideal environment for great power competition.