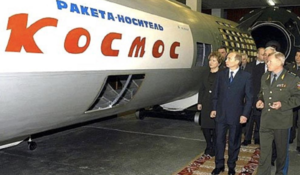 Vladimir Putin’s Worldview and Perspectives on Space: An Analysis of Public Discourse

A corpus of Vladimir Putin’s speeches was drawn from his official Kremlin website. The corpus was examined using semi-automated discourse analysis to gauge Putin’s concerns with space and how these are articulated with general political and cultural issues. The primary findings from the discourse are presented as Putin’s perspectives and worldview with respect to the space domain and general themes.

Putin’s Perspectives and Worldview Regarding the Space Domain

• Putin primarily associates space with missile capabilities and deterrence but he also discusses a wide range of other space-related topics including satellite technology and space travel.

• In all cases, these endeavors are developed and executed by the government run company, Roscosmos.

• Putin is beginning to consider the development of a military-industrial complex that would serve both the civilian as well as the government sectors.

• Pride, success and the military are discussed in association with all space themes, indicating a strong, positive emotional connection to space issues.

• Missiles are the most often discussed space topics and are associated with cultural emotive themes such as pride, sacrifice, victory, enemies, and adversaries. This indicates a strong emotional connection and an association with Russia’s enemies.

• Missiles are associated with military operations, troops, and deterrence.

• Putin’s rhetoric regarding satellites reinforces the pride associated with space ventures and also the involvement of civilians and the private and military sectors.

• Pride, success and Russian nationalism are associated with space travel, as is courage and loyalty to Russia for those who venture into space. These are potent sentiments attached to how Putin regards Russia’s space travel.

• Putin’s primary concern, as expressed through thematic density is the Russian economy, followed by the Russian military. The findings of this latest study parallel earlier analyses with respect to Russian influence in Eurasia and the Middle East (Kuznar, 2016b; Kuznar, Popp, & Peterson, 2017a, 2017b; Kuznar & Yager, 2016).

• Russia itself is associated with ominous themes such as competition, danger, and threat.

• The US is involved with themes that have negative connotations such as threat, adversaries, international violations, the Cold War, and economic sanctions.