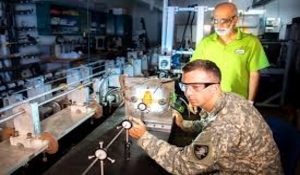 SMA hosted a speaker session presented by Mr. Damon Coletta (US Air Force Academy) as a part of its Future of Global Competition & Conflict Speaker Series. Mr. Coletta first stated that the US needs to find a better balance of science and technology within its policy portfolio. He argued that the US’s science and technology (S&T) policy is more of just a “T” policy, as science plays less of a role over time. He then stated that a Second American Century will involve both cooperation and competition, and it rests upon minimal (yet vital) cooperation at all three levels of politics: international, domestic, and global. However, Mr. Coletta argued, as the US conflates S&T in the midst of modern great power competition, it reduces the prospect for a Second American Century. Therefore, the US must find a way to balance its policies supporting accelerated technology innovation with policies supporting scientific development. Mr. Coletta explained that this argument is based on the premise that science is distinguishable from technology. Science is “the aspect of humanity that is interested in discovering the mysteries of nature,” whereas technology is “harnessing the forces of nature to meet a specific end, and that end is typically for economic profit or military superiority.” He then spoke about Immanuel Kant’s political philosophy and identified three different levels of politics that must work together in order to promote peaceful cooperation: the level of civic constitution, the level of international diplomacy, and the level of transnational issues. Next, he provided three US case studies that demonstrated how the pursuit of science matters: 1) US S&T policy and its effort to “mobilize democracy” post-WWII to present day; 2) the US relationship with Brazil, which he deems a rising power; and 3) US leadership and global governance pursuits in space. To conclude, Mr. Coletta provided a series of policy recommendations, namely that US policy makers should pay attention to theory, think outside of the box in order to identify opportunities for cooperation, beware of “technology panaceas,” and invest broadly in scientific research.