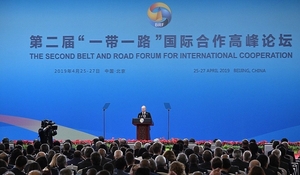 SMA hosted a speaker session presented by Mr. Jonathan Hillman (Center for Strategic and International Studies (CSIS)) as a part of its Future of Global Competition & Conflict Speaker Series. During his brief, Mr. Hillman discussed what China’s Belt and Road Initiative (BRI) is, what threats/risks it poses, and what the US can do better as it determines how to respond to this growing effort. He first described the origin of the BRI and explained that there is no official definition of what a BRI project is. Since the scope of the BRI is so vast, many different conclusions can be made about it. For instance, some Chinese and American companies view the BRI as a business opportunity, whereas some environmentalists see the effort as an opportunity to hold China accountable for its treatment of the environment and potentially motivate it to change its ways. From a US economic or security perspective, the BRI presents reasons for potential concern. As such, Mr. Hillman stated that US decision makers must set priorities and identify “the good (BRI projects that can continue), the bad (projects that require a bit more monitoring), and the ugly (projects that require more focus and attention).” He also spoke about the scale of the BRI, highlighting that $1 trillion has been invested in the effort, though some experts predict that Asia’s infrastructure needs through 2030 will reach around $26 trillion. Therefore, there will still be a high demand for infrastructure projects, and there will still be room for non-BRI projects to take place across Asia. Mr. Hillman then discussed the high-level rhetoric concerning what the BRI is and what it will become. He explained that this effort has expanded beyond China’s own management abilities and that China does not have the government personnel or expertise to oversee an effort of this scale. He also highlighted that the six international economic corridors that China has mentioned have not been defined officially, and thus, they give the BRI an appearance of cohesion that may not actually be there. Mr. Hillman then discussed three categories of China’s BRI strategic objectives: 1) financing (e.g., winning political concessions, accessing resources, controlling operations); 2) design and construction (e.g., setting standards, transferring technology, collecting intelligence); and 3) ownership and operation (e.g., restricting access, adapting to disruptions, monopolizing skills and technologies). Mr. Hillman used Central and Eastern Europe as an example when discussing financing, the African Union Headquarters as an example when discussing construction and influence, and the Pakistan-East Asia Cable Express as an example when discussing ownership and operation. To conclude, Mr. Hillman summarized what the US can do better in response to the BRI, highlighting that US decision makers must set priorities and help build partner capacity and agency.