Contextualizing the Gray Rhino: The Central American “Cycle of Violence” as a Catalyst to Migration 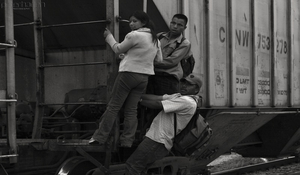 “Contextualizing the Gray Rhino: The Central American ‘Cycle of Violence’ as a Catalyst to Migration“

SMA hosted a speaker session presented by Dr. Skye Cooley (Oklahoma State University) as a part of its SMA DHS CAOE Speaker Series. During his presentation, Dr. Cooley discussed his and his colleague, Dr. Robert Hinck’s (Monmouth College), research, which uses Northern Triangle media perspectives on migration as a reference point to contextualize larger system disruptions taking place within Guatemala, Honduras, and El Salvador. He then stated that contextualizing decisions is imperative. In other words, making sense of outside perspectives and interdependencies is critical to taking sensible actions. Moreover, considering context can also help one address the problems presented by so-called “gray rhinos,” rather than continually neglecting them until they collide with their victims (in this case, US decision makers). Dr. Cooley explained that institutions and contextual structuring allows individuals to co-create meaning and identity. Furthermore, the stability of the structures around individuals allow them to create meaning and community with one another. However, individuals’ actions inform others of who they are only when they can make sense of them via a common reference point, and if social institutions disintegrate, so does one’s understanding of others. Dr. Cooley then discussed his and Dr. Hinck’s research on the violence that is eroding the social institutions of Northern Triangle nations and, more specifically, the mass scale migration that has resulted from this violence. He further explained that migration itself serves as a useful common reference point because it highlights relational interdependencies, commonalities, and contrasts across the region. To conduct their research, Dr. Cooley and Dr. Hinck used narrative analysis as a tool of contextualization and examined 199 articles from ten news sources coming from Northern Triangle nations. Dr. Cooley presented the team’s findings regarding violence, institutional failures, incentives for migration, the role of the US, and consequences and solutions. To conclude, he advised that US decision makers develop regional solutions; clarify US positions in relation to the region; consider a multi-pronged, multi-staged approach rather than an iron-fist approach; combat corruption; and offer economic lifelines.