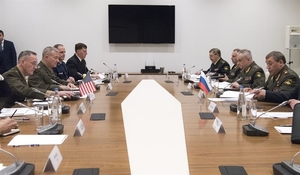 SMA hosted a speaker session presented by Amb. James Dobbins (RAND), Dr. Raphael Cohen (RAND), and Dr. Howard Shatz (RAND) as a part of its Future of Global Competition & Conflict Speaker Series. The speakers presented their research, which examined “nonviolent, cost-imposing options that the US and its allies could pursue across economic, political, and military arenas to stress (i.e., overextend and unbalance) Russia’s economy and armed forces, in addition to the Russian regime’s political standing at home and abroad.” To begin, Amb. Dobbins examined Russia’s anxieties and vulnerabilities in order to determine the most logical way to get Russia to respond to cost-imposing measures. The key vulnerability that he addressed was the Kremlin’s anxiety regarding the durability of the regime. Russian leaders have deep-seated anxieties about Russia’s domestic stability and its place in the world, and US strategists could potentially use these anxieties to their advantage. Moreover, Amb. Dobbins explained that many of the most promising ways to “extend Russia” are not military in nature. Amb. Dobbins, Dr. Shatz, and Dr. Cohen then proceeded to discuss the most promising geopolitical, ideological, informational, economic, air, space, nuclear, maritime, land, and multi-domain measures that the US could implement in order to achieve this goal of extending Russia. During this portion of the brief, Dr. Cohen specified that just because the US wants to expand its investments in certain fields, doesn’t necessarily mean that Russia is interested in matching the US dollar for dollar or man for man. Two examples of such fields are the air and sea domains. To conclude, the speakers presented their overall conclusions: 1) economic measures (more specifically boosting US energy production and sanctions) offer the highest benefit at the lowest risk and with the greatest likelihood of success; 2) geopolitical, ideological, and nuclear measures tend to come with the highest risks of unwanted second-order effects; and 3) selected military measures may prompt additional Russian investments, but most military measures are limited due to the fact that Russia is not seeking military parity with the US.

You can also find their RAND report, upon which this session is based, at https://www.rand.org/pubs/research_reports/RR3063.html