Operationalising Deterrence in the Indo-Pacific 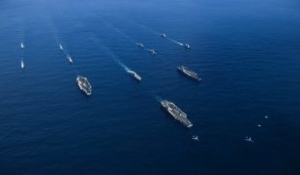 Dr. Townshend began by discussing how the US-Australia alliance has been optimized in recent years due to increasing competition with China at all levels of conflict on the spectrum. To effectively deter Chinese coercion, he argued, the US and Australia, along with their regional allies, need to forge cooperation across a multi-dimensional spectrum and fundamentally change how the alliance works to better combat this coercion. Deterrence is these countries’ shared interests; therefore, one country cannot assume responsibility for it alone. Dr. Townshend then spoke about the asymmetries in how the US and Australia approach political risk-taking and strategic escalation. These asymmetries, coupled with the asymmetry in Chinese coercion tactics, indicate that proactive action is necessary to effectively combat them. Dr. Townshend suggested criminalizing foreign interference and strengthening domestic resilience against these Chinese actions, as well as implementing a whole of government/society approach to condemning specific Chinese actions. As the conventional balance of power in the Indo-Pacific changes, it is unclear whether the US has the ability to unilaterally maintain the status quo; thus, a strategy of collective defense among regional allies is necessary to avoid a shift in conventional power towards China, according to Dr. Townshend.

Next, Dr. Santoro focused on conventional power at the higher end of the spectrum, specifically with regards to nuclear deterrence. He stated that the nuclear landscape is becoming increasingly dangerous as China, North Korea, and Russia view nuclear weapons as not just a tool in conflict, but for show of power as well. He also discussed how US allies are on the frontlines of the changing landscape in the Indo-Pacific, and they are the ones driving new deterrence demands and press for NATO-like commitments in Southeast Asia. In addition, there has been an increase in friction emerging between the US and its allies with regards to greater integration of US conventional capabilities and the dangers that increased integration poses due to its lowering of the nuclear threshold. Dr. Santoro stated that the status quo in the Indo-Pacific is being challenged by China’s actions and the changing state of the US and its allies, and fundamental changes need to happen in order for the balance of power and deterrence of coercion to remain effective.

To conclude, Dr. Thomas-Noone focused on conventional lethal integration and Australia’s view of nuclear deterrence. He stated that historically, Australia has always been a taker or receiver of nuclear deterrence rather than a provider. It has generally avoided conversations about nuclear deterrence directly related to the Indo-Pacific region as well. However, the status quo is now being challenged based on recent trends in US doctrine. The 2019 National Defense Strategy (NDS) indicates that allies will be asked to play greater roles in regional deterrence and conveys a need for US regional combatant commanders to incorporate allied defense in its pursuit of active missile defense. Australia, according to Dr. Thomas-Noone, does not want its allied force posture to be over-meshed with that of the US, nor does it want nuclear thresholds to be lowered or for there to be increased nuclear use in the region. So, it must work with the US to find a reasonable solution.

Dr. Santoro, Dr. Thomas-Noone, and Dr. Townshend’s publication, also entitled “Operationalising Deterrence in the Indo-Pacific,” can be found at https://www.ussc.edu.au/analysis/operationalising-deterrence-in-the-indo-pacific