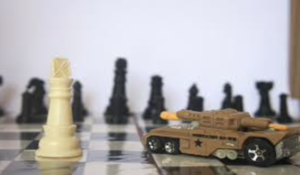 Dr. Lynch stated that we are entering a new era of great power competition (GPC) between the US and its systemic rivals, Russia and China. However, he believes that historical examples of past GPC can still provide insights for how the current competition will end. He emphasized that competition occurs on a continuum on which states compete through their militaries, ideologies, political institutions, economies, and the control of information. He then defined a great power as a country that has unusual capabilities which aid in its pursuit of its objectives abroad and force other countries to take its wants and needs into account when forming policy. In historical examples of GPC, there are usually several countries that can be considered as great powers who rarely cooperate with each other. However, instances of outright military conflict are also very rare. Dr. Lynch predicted that what will likely occur between the US and its adversaries is a mixture of cooperation to protect global markets, on which they both rely, and competition to undercut each other politically. He further suggested that a drastic transition of power from the US to either China or Russia is unlikely because a transition of power usually occurs after a major military conflict. A major military conflict will probably not occur for several reasons, including that these countries are unlikely to demean each other’s domestic populations. Demeaning another country’s domestic population was mentioned as the quickest way to accelerate political tensions.

Following the collapse of the Soviet Union in 1992, the US enjoyed a period of dominance where countries looked to cooperate with the US to increase their own economic and domestic prosperity. According to Dr. Lynch, this period ended in 2008, when Russia and China began covertly competing with the US, which progressed to overt competition in 2017. He stated that despite China’s overt competition with the US, the US should not consider itself as being in another Cold War. This is because China is not trying to supplant current global political systems but instead trying to expand its legitimate authority over them. Dr. Lynch added that as long as the USG does not force its allies to make stark economic choices between the US and China, then the US should maintain its advantage in the short term.

Dr. Lynch ended his presentation by stating that the Biden administration is facing a unique challenge because more than 30% of US citizens are resistant to the idea of increasing global cooperation. However, he believes that the current administration will be able to strike a balance of cooperation and competition with China that will decrease the likelihood of open conflict.