Toward an Inclusive & Balanced Regional Order: A New US Strategy in East Asia 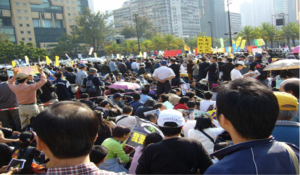 Dr. Swaine began the presentation by summarizing his and his colleagues’ Quincy Institute report findings. He provided insights on key regional dynamics, the strengths and weaknesses of the US’s past East Asian strategy and ultimately an alternative East Asian strategy going forward. He stated that the US’s current strategy is too reliant on the use of the military as a diplomatic tool. Instead, he insisted that there are three regional trends that are occurring which should guide the US’s strategy. These include 1) a shift in regional power that favors China, 2) increasing tensions over regional disputes, and 3) transnational challenges to all countries. Dr. Swaine added that while China is increasing its military capabilities, it will not become a regional hegemonic power. Moreover, he stated that there must be a more realistic approach to denuclearization on the Korean Peninsula and that threats to political and social stability threaten all countries.

Next, Dr. Swaine stated that these insights led the research team to identify four areas in which a new strategy should be formed. First, the US must develop a defensive alliance that includes more diplomatic dialogue between the US, China, and US allies. Second, the US should gather regional support for the reformation of the World Trade Organization (WTO) and regional technology organizations, which will balance the current power dynamic between China and other East Asian countries. Third, the US must rally support to fight against human rights violations so it can increase its image as a global protector of human rights. Lastly, the US must address its own domestic, societal, and economic issues, which are currently damaging its global image.

Dr. Odell began her portion of the brief by stating that China is not seeking global military dominance or trying to eject the US military from East Asia. China is instead trying to control disputed land and sea territory on its borders. However, she did acknowledge that there is some uncertainty over what China will do in the future with its growing military. There is a fear that China will continue to use its military power to coerce and bully smaller nations. According to Dr. Odell, the US should adopt a position of mutual denial with China by making it impossible for China to aggressively extend its borders. She stated that while it is unlikely that China will attack the US or its allies, the US should stop participating in joint exercises that could escalate into armed conflict with China. Dr. Odell concluded by stating that increasing political dialogue should deescalate conflict.

Ms. Lee then gave recommendations on how to deescalate conflict between North and South Korea. She stated that ultimately, the threat of conflict between the US and China comes in the form of proxy wars, which could include further conflict on the Korean Peninsula. If this conflict does occur, it could have massive global and regional ramifications due to North Korea’s extensive nuclear arsenal, which it built with mostly stolen technology and information. Ms. Lee also emphasized that an official peace treaty ending the Korean War is popular among US citizens; however, if there is to be a unification process to formally end the conflict between North and South Korea, then the US’s and China’s role as moderators will be crucial. Ms. Lee concluded the group’s presentation by emphasizing that the US government needs to rethink its short-term and long-term goals for the Korean Peninsula.