Unraveling the Resilience of Jihadist Insurgencies: Lessons from Mosul & the Islamic State and The Long Jihad 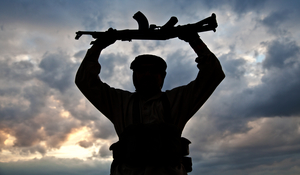 Following Iraq’s first democratic election, most opportunities to increase the strength of Iraq’s government institutions, by its government and Western states, allowed for militants and terrorists to fill a momentary power vacuum. These terrorists, whom would later become Daesh, took advantage of citizens’ lack of trust in the Iraqi government to recruit followers and mobilize itself more quickly than the government could react. Mr. Mohammed commented that after Iraq’s election, the government would have only needed a security force to maintain stability. However, the government waited too long to enforce its control on the country. Eventually, when it did react to the growing influence of Daesh and other militant groups, the government had to use its military. The use of its military created further distrust between the citizens of Iraq and their government. This led many civilians to stay out of the conflict all together.

It is important to keep militant groups, such as Daesh, from seizing too much power, because a country’s apolitical majority will support the dominant actor. Dr. Ingram commented that the Taliban was also successful in forming a religious caliphate. By using propaganda to weaken citizens’ trust in Afghanistan’s central government, the Taliban successfully kept a large portion of Afghanistan’s population out of the conflict. Also, the Taliban’s recent success will likely reinvigorate other jihadist groups’ efforts. He recommended five pillars to countering religious extremist organizations: a) increasing the awareness of government organizations to overcome ‘strategic sock,’ b) identify and degrade the extremist organization’s main economic exports, c) exploit weaknesses in the terrorist organization’s structure, d) figure out how to avoid violent situations and establish sustainable community programs, and e) prevent new insurgencies from starting.