Great Power Competition in the Indo-Pacific in the 21st Century 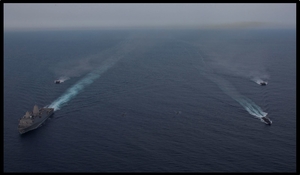 “Great Power Competition in the Indo-Pacific in the 21st Century”

SMA hosted a speaker session presented by Col Joachim Isacsson (UK Ministry of Defence Development, Concepts and Doctrine Centre [DCDC]) as a part of its Future of Great Power Competition & Conflict Speaker Series. To begin, Col Isacsson discussed the origin and mission of DCDC. He then discussed the global strategic trends in which DCDC aims to identify, such as key drivers and discontinuities that play into human interactions. He then enumerated six drivers of change, which include 1) increasing environmental stress, 2) changing populations and habits, 3) centrality of information, 4) accelerating technological advancements, 5) increasing human empowerment, and 6) power transition and diffusion. Col Isacsson proceeded to discuss some of the key characteristics that determine whether a country is best-suited to have power and stated that as the power balance shifts, competition and polarity will continue to increase. Next, he explained how the US-China relationship and the future of China are instrumental in determining how the world order will look. He discussed the various advantages that the US has, contrasting them with the challenges that China is facing or will face in the near future. He also spoke about the economic, political, and social difficulties that nations such as Russia, India, the UK, Germany, and France will face in the near future. He explained how competition will play out in a variety of new domains, including technology, space, oceans, cyberspace and information, international institutions, climate, energy, and trade. To conclude, Col Isacsson spoke about geostrategic competition in the Indo-Pacific, discussed the Indo-Pacific security architecture, and outlined a series of security implications.