Achieving a Stable Regional Order in the Asia Pacific: What Does the US Need and What Should It Not Negotiate Away – A Korea Strategic Outcomes Virtual Think Tank Report 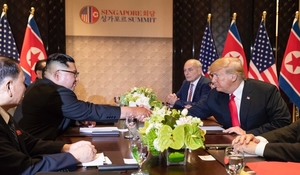 [Q6] What are the minimum regional and domestic political, economic, and social conditions that are essential for achieving a stable regional order in alignment with US and ally interests? Are there any factors that are sufficient to generate such stability in the region? That is, what should not be negotiated away?

This report summarizes the input of seventeen insightful responses from the Korea Strategic Outcomes Virtual Think Tank (ViTTa) expert contributors. While this summary response presents an overview of the key expert contributor insights, the summary alone cannot fully convey the fine detail of the contributor inputs provided, each of which is worth reading in its entirety. For this report, the expert contributors consider what political, economic, and social conditions are conducive to achieving a stable regional order in the Asia Pacific that is in alignment with US and US ally interests. This summary details the various conditions that emerge.

Nearly all of the contributors indicate, either directly or indirectly, that, if the United States’ desired regional order in the Asia Pacific is interpreted as continued US military presence and dominant US influence in the region, then it is unlikely to be stable. Such a regional order fundamentally conflicts with China’s strategic interest in becoming the dominant regional power and influencer. For China, weakening US alliances, and pushing the US out of the region—politically, economically, and militarily—is essential to achieving its own regional objectives. Contributors, therefore, generally align with the
conclusion put forward by Dr. Michael Swaine of the Carnegie Endowment for International Peace, that US “efforts to double down on [its] predominance [in the region], with or without allied support, are likely to prove futile and excessively destabilizing.” Accordingly, a stable regional order, contributors
suggest, may require achieving a unique balance between the United States’ force posture and China’s expansionist tendencies. 3 It is clear, however, that the fundamental incompatibility between US and Chinese interests will make any effort to achieve a stable regional order in alignment with US and US ally
interests quite challenging.

When considering specific conditions that are conducive to regional stability in the Asia Pacific, therefore, it is important to recognize that what either the US or China sees as a driver of stability, is likely to be seen by the other as a barrier to stability. The table below summarizes what contributors identify as key conditions of the regional order preferred by the US and its allies, as well as the often conflicting (red cells) nature of these US preferences to those of China and Russia.

Of all the conditions highlighted as conducive to a stable regional order as currently envisioned by the US, only final, fully verified denuclearization (FFVD) in the DPRK is identified by contributors as an essential condition that should not to be negotiated away. While contributors contend that FFVD will make the region safer and more stable, they also suggest that it has implications for achieving other US objectives in the region. For example, Dr. Andrew O’Neil of Griffith University argues that settling for anything less than FFVD in the DPRK could be interpreted by US allies as a signal of declining US regional commitment and, as a consequence, undermine US deterrence credibility. This could lead US allies such as Japan or the ROK to reevaluate their own military capabilities, potentially including the acquisition of nuclear weapons, and, consequently, undermine US non-proliferation goals.

The contributors, therefore, emphasize the importance of taking a gradual, multilateral approach to denuclearization that recognizes and accommodates the intermediate objectives of key regional actors. Achieving an agreement that has regional buy-in, particularly from the United States’ regional allies, contributors explain, may counter concerns regarding US disengagement. Moreover, while including China and Russia in the negotiations may increase the complexity of the negotiation process, and the potential for a breakdown in negotiations as a result, it also decreases the likelihood that the US and China, in particular, will come into direct confrontation over any negotiated outcomes.

The contributor response overall highlights the significant impact that competing interests and regional competition between the US and China has on stability in the Asia Pacific region. The ways in which the US and China currently perceive their regional interests seem destined to lead to a clash between the two powers if not amended. A regional order based on continued US military presence and dominant US influence fundamentally conflicts with China’s current interests in increased, if not dominant, regional political, military, and economic power. If the US fails to account for China’s interests, therefore, the actions that the US is likely to take to reinforce its vision of a stable regional order may end up decreasing stability in the Asia Pacific region over the longer-term. Additionally, if the US fails to redress the loss of confidence amongst its regional allies and partners in its economic and security commitments to the region, it is hard to see how the US would continue to exercise regional influence at all. Therefore, the most effective way for the US to balance these two considerations, the contributors suggest, appears to be by working multilaterally with regional allies as well as with China and Russia toward a stable regional order in the Asia Pacific.