From Control to Influence: Cognition in the Grey Zone 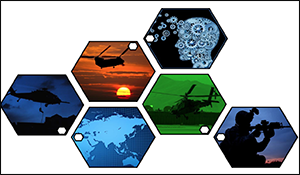 From Control to Influence: Cognition in the Grey Zone.

Key features of the Grey Zone: the centrality of influence

Grey Zone conflict is necessarily limited conflict, sitting between “normal” competition between states and what is traditionally thought of as war. Thus, the central aim is to influence the decision-making of adversaries and other key audiences, rather than removing their capacity to choose using brute force in itself. Success requires moving the emphasis from control to influence.

We systematically evaluate empirical, real-world evidence to identify key cognitive factors for influence at each level. We integrate these into usable tools. For example, a “Checklist for empathy” (Box 2.1) provides a realistic analysis of an adversary, ally and other’s decision calculus, which includes key human motivations such as fairness, legitimacy, surprise and self-interest.

Key cognitive factors can be common or differ between domains. For instance, managing surprise and predictability (concepts incorporated in a simple “prediction error” framework grounded in neuroscience; Chapters 7-8) is critical across domains and levels to cause intended effects and avoid unintended effects.

 Combating propaganda, conducting information operations and messaging more generally audience. Trust is fundamentally psychological, and trusted messengers can often only be  created with over longer timeframes (e.g. the BBC). 

We analyse the two biggest historical cases of inadvertent escalation between European powers since 1815: the road to the Crimean War of 1854 in which some 800,000 soldiers died in the Anglo-French versus Russian conflict; and road to the First World War. Both were preceded by lengthy Grey Zone confrontations. U.S. decision-makers must be aware that each episode in the Grey Zone sets the stage for the next interaction. Violating norms, even for admirable reasons, can escalate Grey Zone conflict on a longer timeframe.

 (4) Multiple audiences: Ally and third party perceptions are critical in the Grey Zone – and U.S. actions will inevitably reach multiple audiences. For instance, if it lost allied support in the South China Sea, the U.S could suffer deterrence by ally denial.

 Audience analysis is critical across these multiple audiences. This requires both local  knowledge within key local audiences, and also the ability of the U.S. analysts to put  themselves in the shoes of their audiences – the type of “outside-in” thinking enabled by our  Checklist for Empathy.

(5) Multiple interpretations: Ambiguity is a key feature of the Grey Zone. Ambiguity’s essence is that events or actions are open to multiple interpretations. Ambiguity provides an extra layer of uncertainty even before one consider an event’s risk, and can thus directly contribute to crisis escalation. Ambiguity can also help de-escalate crises, for example enabling compromises that save face on both sides (e.g. the “apology” in the 2001 Sino-U.S. EP-3 incident). In the long run ambiguous actions can change behavioural norms and thus escalate international tensions.