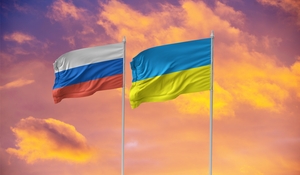 Russia’s information operations (IO) are playing a pivotal role in its ongoing invasion of Ukraine. Dr. Vartonova stated that not all narratives that Russia circulates in the information environment (IE) should be called disinformation because Russia uses truthful information in its IO campaigns as well. For example, Russian media highlighted that the Kremlin has given NATO an offer to end the war in Ukraine. However, it knew that NATO would most likely not accept its treaty. A more appropriate term for this kind of IO is adverse rhetoric. Most of Russian IO is designed for an international audience; however, it had to also convince its domestic audience that it should invade Ukraine. Russia used narratives such as the de-Nazification and de-militarization of Ukraine—among others—to keep the Russian people engaged. Russia has continually changed the dominant Ukraine narrativeto keep the support of the Russian population. Some of these changing narratives include a claim that Ukraine is creating biological weapons, targeting ethnic Slavs.

Russia maintains its IE by creating content on social media—like YouTube—that circulate pro-Russian and anti-US narratives and images. Russia shows fabricated, staged, and real images that support narratives of Ukrainian war crimes and Nazi marches in Ukraine’s capital, Kiev. Russia tries to convince its people that they have two options, to become a slave to the West and globalization or live through heavy sanctions. Dr. Vartanova commented that Russia has used truthful statements by NATO members and other Western leaders to bolster their narratives and the Russian people’s resolve. Russians have shown a strong historical resolve, stemming from its victory in World War II. Frequent themes in Russian information operations include managing chaos, a global NATO, and that the US is seeking to control all of Europe and Eurasia for its wealth of resources.

To access the recording of this session, please email Ms. Nicole Omundson (nomundson@nsiteam.com).

Dr. Olga Vartanova is an experienced geopolitical (predictive) analyst, born and educated to the doctoral level (PhD in Linguistic Research and PhD in Theoretical Analysis) in Russia. Her 30+ year career in European academia, international business, and in the US Intelligence Community (IC) includes working in Russia and its near and far abroad (post-Soviet space), Southeast Asia, Oceania, and the Middle East. There, she conducted fieldwork in support of the US cyber, WMD, counterterrorism, counterintelligence, military, and influence operations. Dr. Vartanova delivered talks on her research to the IC, DoD, and allied military partners, CONUS and OCONUS. She has authored many articles in Russian, French, and English languages in both Russia and in the US. She also has 41 copyrights on books published in Barcelona, Spain. Her recent work on Russian Informatsionnoye protivoborstvo (IPb) includes a wide body of research focused on Russian strategic interests and strategic operations in the information environment that support Moscow’s global strategy. She is well-known in the IC for her unique analysis (military, comparative, predictive, etc.) of Kremlin’s contemporary IPb constructs and their implications for US decision-makers in global strategic and tactical operations. Dr. Vartanova is a visiting scholar and a consultant at the Marine Corps Information Operations Center (MCIOC).