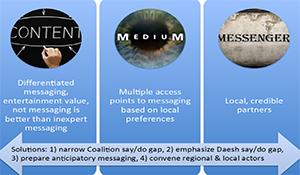 Question (V1): What is Missing from Counter Messaging in the Information Domain. What are USCENTCOM and the global counter-ISIL coalition missing from countermessaging efforts in the information domain?

“Western countries have failed to match the coordination, intensity, not to mention zealotry of the communication effort of [Daesh’s] global, decentralized movement.” Peter Welby, Centre on Religion & Geopolitics. One way for evaluating CENTCOM and the global counter-ISIL Coalition messaging is to break the idea into its three component parts: the content, the medium (the way the message is transmitted), and the messenger (see Beutel).

To be most effective, messaging need to be targeted to specific populations, politically/ethnically correct, and entertaining. First, while there is a need for transnational messages (often those that seek to introduce alternative narratives—a mass targeting technique that uses non-linear messaging to achieve desired outcomes [see Beutel and Ruston]), messaging is most effective when it is tailored to local circumstances; presented by trusted, local voices; and in a format preferred by the target audience (radio, television, social media, religious services, etc.). This requires that information operators clearly understand the motivations, interests, and world views of potential adherents (Zalman). Based on analysis of extremist narratives by Scott Ruston at Arizona State University, an effective system of alternative narratives must recognize the need for justice, recognize threats faced by the target audience, must offer some route to glory (resolution), and must offer some subjection to a higher ideal (whether that is family, tribe, or nation). Nuanced understanding of the target audience can serve to not only contextualize the type of messaging effort and its aims but also to provide a necessary constraint upon the expected return of these programs (Huckabey & Picucci).

Related to this, because existing rivalries, ethnic differences, and stereotypes are so difficult to unravel in MENA, extra caution should be employed not to inflame tensions during conditions requiring a fast response (Briant). Unsuccessful counter-sectarian messaging could exacerbate or entrench divisions. Erring on the side of caution is better than attempting and failing counter- sectarian messaging.

Third, compared to ISIL messaging, Coalition messaging is frankly boring (Bean & Edgar, Taylor, Welby). MAJ Patrick Taylor, 7th Military Information Support Battalion USASOC, noted that “to entertain is to inform and to inform is to influence.” Yet, Coalition messaging lacks humor and is sonically sterile. ISIL frequently utilizes music and sound (often via nasheeds) to strengthen and complement its written or spoken message (Bean & Edgar). Aside from incorporating music and sound into Coalition messaging, satire and humor may be used to expose ISIL’s failings, inconsistencies, and false claims (Taylor).

Effective messaging conveys targeted messages to local communities via preferred channels (Beutel). This could be via radio, television, trusted religious leaders, etc. Social media is not the only or best way to reach all audiences. Therefore, information operators need to develop “multiple access points” so that populations have various way to access and interact with the message in familiar formats (Taylor).

Experts largely agreed that a significant obstacle facing Coalition messaging efforts is that it lacks credibility. Government entities are not credible voices (Beutel). While there is a significant cohort (Abbas, Braddock, and Ingram) that argues in support of better leveraging and supporting local, credible partners to disseminate messages, there is another cohort (Briant, Beutel, Everington) that believes that credible voices have to be free of any kind of government support, which threatens to taint the source if discovered. But one thing the USG can credibly do is to amplify the voices of defectors and refugees from ISIL-held areas to call attention to ISIL’s failure to live up to its promises (Elson et al).

Strategies for Filling in the Gaps in Coalition Messaging

A team of experts from George Mason University, led by Dr. Sara Cobb, argued that engagement, rather than countermessaging, is the most effective shaping tool. Efforts to transform existing narratives through engagement would satisfy the same objectives often achieved through traditional messaging while still “disrupting” adversary conflict narratives and shaping conditions conducive to later stability and/or peace operations.

Similarly, Alexis Everington, who has conducted primary research in Syria, noted that we are in a post-messaging phase in the region where “messages are no longer useful and their potential ran out several years ago.” Efforts should now be focused on narrowing the “say/do” gap (Beutel, Briant, Everington, Mallory). Beutel and Mallory argue for a narrative led operation that closely ties US messaging to the operational action plan.

As the Coalition narrows its say/do gap, it should work to create a wedge between ISIL and its target audience by highlighting ISIL hypocrisies and failures (such as violence against Sunnis, failure to provide services, or evidence of corruption of its leaders) (Ingram, Elson et al). It is important also to respond quickly to contradict disinformation (Beutel). Another effective strategy would be to prepare messaging ahead of time for anticipated events in order to be able to disseminate quality messaging as events unfold in real time (Mallory, Ingram).

In terms of enhancing effectiveness of current messaging, recognition of how red understands the goal and vulnerabilities of its own messaging efforts can provide improved guidance on where counter-messaging can be effective and where non-response may be a more productive approach (Huckabey & Picucci). Furthermore, the authors suggest that implanting a graduated process toward achieving desired end-states can be leveraged to provide a stronger linkage between measures of performance and measures of effectiveness.

  Finally, Alejandro Beutel, a researcher at the University of Maryland’s START center, believes that one of the best things the USG can do is to play the role of “convener.” While CENTCOM may not be credible to the target populations, CENTCOM is at least credible to the credible messengers. So what CENTCOM might be able to do is to play the role of convener to have gatherings where actors in the region can interact with one another and start to establish some mediums of communication and relationship building.