The Opioid Crisis: China, National Security, and the Undeclared Conflict 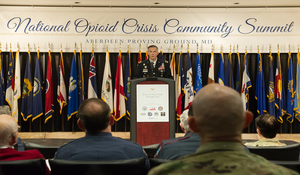 During this panel discussion, CAPT (Ret.) L. R. Bremseth discussed the severity of the opioid crisis in the US and posed the following question: Is this chemical warfare being brilliantly and effectively instigated against the US? He also outlined a series of potential explanations as to why the US is currently losing this war. Next, SSA Angela von Trytek discussed the US Drug Enforcement Administration’s efforts—in collaboration with China’s substance control administration—to combat the trafficking of illegal fentanyl from China. She stated that combatting the trafficking of fentanyl and eliminating the clandestine production of substances used in creating fentanyl products, particularly in China and Mexico, are the Drug Enforcement Administration’s top priorities. Brig. Gen. Reist then assessed what the role of the military should be, both ideally and constructively, with regards to drug trafficking. He also discussed what the rules of engagement should be and stressed the importance of both extensive surveillance and building an intel picture on the border. To conclude, Prof. Giordano argued that, despite the lack of conventional destructive outcomes that are byproducts of conventional war, non-kinetic engagements have immense potential for multiple levels of disruption. He further explained that non-kinetic engagements provide distinct advantages for the instigator and disadvantages for the recipient, which makes it difficult for the target to defend itself. Thus, according to Prof. Giordano, the US should respond to the opioid crisis by thinking about it in terms of non-kinetic warfare and recognize the importance of identifying similar problems, eliminating those problems, and then determining how it can prevent a similar problem from appearing.

Note: SSA von Trytek’s portion of this panel discussion was not recorded, as per her request.