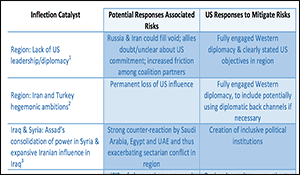 Question (R5.2): What are the risks associated with the security situation in Syria/Iraq outpacing
diplomatic progress and policy in the region? What should be done about it?

Our experts noted that we cannot say with certainty what the future security environment will look like in the Middle East. The region “is highly fluid. And fluidity means that alliances are temporary and that it’s very difficult to draw any long-term or even medium-term perspectives on what might happen,” Dr. Ehteshami noted. Limited visibility into the future is compounded by the sheer number of inflection points facing actors in the region as each tries to shape the environment in its favor.

According to Daniel Serwer, one of the few remaining options for the US in Syria is to work to ensure that Assad and Iran do not dominate post-war Syria. This is because, as Faysal Itani notes, the United States has accepted that the “regime and its partners have essentially won the war” in Syria.

As Hala Abdullah notes, “everything seems to be happening in Iraq at once.” In fact, most of the issues and risks identified in the table above focus on Iraq. According to Vern Liebl, potential catalysts in Iraq range from the re-emergence of ISIS as an insurgency to a sudden positive shift of Sunni attitudes towards the Iraqi government. Many of the catalysts listed are interrelated in a highly complex system, which is why the potential responses to these problems are strikingly similar; they all require US diplomatic and policy actions. It is worth noting that the catalyst most frequently cited by contributors is the lack of US leadership and clearly stated goals in the region (Abdulla, Bahgat, Ehteshami, GCKN, Serwer).